There Might Be a Hellboy 3, According to Its Director and Star 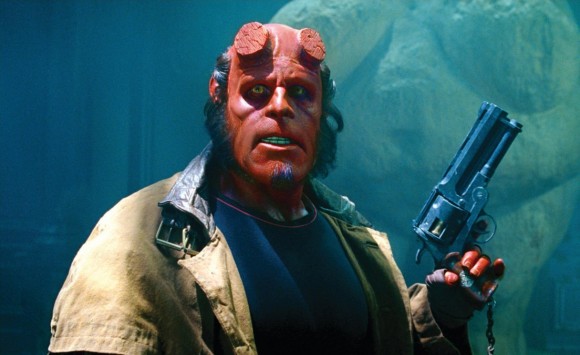 Despite Ron Perlman‘s vow to never go through the makeup process again, he and director Guillermo del Toro both seem to feel that it might just be worth it to do a third Hellboy movie. The comments came during Comic Con, where del Toro was quick to point out that his projects are not always made over a short period of time. But both director and actor seem to agree that there is still more story to tell, and honestly, how do we move on when the second movie left us hanging? With twin Hellboy babies?

Nothing is official yet, so don’t consider this a confirmation of Hellboy 3. But it looks like if del Toro could have it his way, Perlman is on board and this might just happen. Even if it doesn’t happen for a while, don’t rule it out just yet. Says del Toro, who is also promoting his upcoming horror release Don’t Be Afraid of the Dark:

“I carried Don’t Be Afraid of the Dark thirteen years. I carried Hellboy for almost eight years before it got made, so I’ll stick to [a project] until it gets made … The third one is the hardest one because it’s the darkest one and not necessarily has a happy ending. The third one is epic. It’s gigantic.”

In other words, it ain’t over ’til the giant red ape sings. As for Perlman, who said in 2008 after Hellboy II: The Golden Army was released that he wouldn’t be willing to go through the makeup process again, he might still have a little fight left in him — if the story is good enough, and it sounds like it is:

“There are things that are introduced in the first two films that have to be resolved in the third one. So for us to not make the third film would be kind of an injustice to [the fans].”

So, everyone get ready: we might have a third Hellboy movie on our hands. Even if it takes 23 years for it to happen.