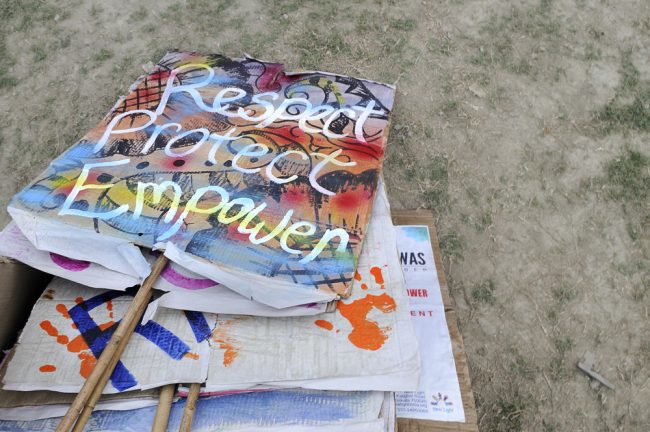 Heather D. Heyer, a 32-year-old paralegal from Greene County, Virginia, was murdered while protesting against hate yesterday. She was struck by a car driven by white supremacist James Fields Jr. of Ohio, who rammed into a crowd of anti-racist protesters in Charlottesville, Virginia.

Heather Heyer, 32-years-old, was the victim of white supremacist violence yesterday in Charlottesville.

Many users have been sharing what was reportedly Heyer’s final Facebook cover photo – which is a telling testament to how she spent her last hours. “If you’re not outraged,” the image reads, “you’re not paying attention.”

Fields has been charged with with second-degree murder, three counts of malicious wounding, and failing to stop at a fatal accident, and the Justice Department has also opened federal and civil rights investigations into Heyer’s death. Though I am deeply pessimistic about what our racist Attorney General will decide in the investigation, I hope the opening of one at least brings some comfort to Heyer’s family and sheds some light on how these racist organizations recruit and organize.

Two Virginia State Police troopers, Lieutenant H. Jay Cullen and Trooper-Pilot Berke M.M. Bates, also died yesterday in a helicopter crash. Investigators are still looking into the cause of the crash, so I don’t know if white supremacist violence had anything to do with their deaths, or if it was a simple malfunction – but I do know that they died working to protect the people of Virginia during a state of emergency caused by a racist rally.

Heyer’s friend Felicia Correa set up a GoFundMe page for Heyer’s family, which both GoFundMe and CNN’s Jake Tapper describe as verified. Speaking to The Washington Post, Correa remembered Heyer as someone who always helped others – including Correa herself. She described Heyer as a “young white woman who died standing up not just for people of color in general but, also the people of color that I love, that I worry about.”

“She died for a reason,” Correa continued. “I don’t see any difference in her or a soldier who died in war. She, in a sense, died for her country. She was there standing up for what was right. I just want to make sure that it wasn’t in vain.”

Heyer’s manager, Alfred A. Wilson, described her to The New York Times as a “very strong woman,” who was often moved to tears by injustice in the news and would not tolerate “any type of discrimination. That’s how she’s always been.”

According to the GoFundMe page, Heyer’s mother, who is not ready to speak publicly, said, “She died doing what was right. My heart is broken, but I am forever proud of her.”

Rest in peace and power, Heather.