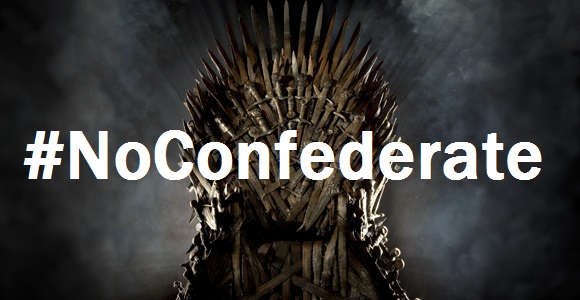 During last night’s Game of Thrones, viewers took to Twitter to demonstrate their continued disapproval of HBO’s newly announced slavery fan fiction, Confederate. As our own Marykate wrote yesterday, people were tacking a new hashtag onto their Game of Thrones-related tweets: #NoConfederate. April Reign—the activist behind #OscarsSoWhite—created the hashtag, and over the course of the night, #NoConfederate took the number one spot on the top trending topics in the United States and number two worldwide. So you know, if Roxane Gay’s impassioned writing on this slavery fan fiction wasn’t enough to get you to pay attention to what’s going on, here’s yet another reason to educate yourself and get up to speed.

HBO issued a statement in response to the Twitter campaign. They wrote (via The Hollywood Reporter):

“We have great respect for the dialogue and concern being expressed around Confederate. We have faith that [writers] Nichelle, Dan, David and Malcolm will approach the subject with care and sensitivity. The project is currently in its infancy so we hope that people will reserve judgment until there is something to see.”

So, you know, it’s kind of a non-statement, the kind of thing you put out when you don’t want to say anything at all. The words here reflect much of HBO’s attitude towards criticism of the show in general since its announcement over a week and a half ago. Like its many defenders, HBO is holding up the “let’s wait and see” argument, placing its faith in the writers and producers of the forthcoming not-so-alternate-reality drama. Of course, such an argument would have been easier to swallow if said writers and producers had been able to demonstrate a nuanced understanding of that time period instead of doing, well, the opposite.

In a series of now-deleted tweets, Atlantic senior editor Adam Serwer commented on an interview between Vulture and the show’s creators. He wrote, “If you can’t recall the name of the Battle of Antietam and first historian you name is Foote, you shouldn’t make a show about the Civil War.” By nearly all accounts, the interview felt like a rushed attempt at damage control, a grab at the brakes of a runaway train headed for disaster. Since then, two of the writers, Nichelle Tramble Spellman and Malcolm Spellman have left Twitter.

Here’s the thing about Confederate: yes, Nichelle Tramble Spellman and Malcolm Spellman are two writers of color who have been listed alongside D.B. Weiss and David Benioff. But those latter two names are attached to the creation, propagation, and further over-brutalization of a television show that has itself garnered a reputation for being needlessly heinous in its depiction of violence towards women and subjugation of people of color—you know, after it took about seven seasons for said people of color to gain any kind of prominence, even visually.

To head off arguments that Weiss and Benioff may end up doing the same thing here, HBO is promising that all the writers have equal say at this table. There’s just a few issues with that, though. For starters, if you think the network—and Hollywood in general, for that matter—is actually going to listen to criticisms from people of color when the criticisms are coming from inside the house, you haven’t been paying much attention to the entertainment industry, period. Despite the consistent criticism and backlash regarding GoT, Weiss and Benioff are enjoying a popularity and prominence that has gifted them with some significant weight to throw around Hollywood, especially at HBO. Asking people to offer Weiss and Benioff the benefit of the doubt after being disappointed time and again by the problems within Game of Thrones really does seem like too much here.

The biggest problem of all, though, is that two white men are being offered an ostensibly “equal” (read: actually much more stronger, prominent) spot at the table where the horrors of slavery are being discussed. Truly, we live in a world where we keep talking about giving people the chance tell their own stories, but instead of actually doing that, we give those chances to exactly the wrong people. If HBO wanted to provide the thought-provoking show that Confederate will undoubtedly fail to be, then they shouldn’t have turned to writers and creators who have already been criticized for their lack of understanding regarding representation and, well, women in general.

It would be remiss of me to note the show’s attempts at righting the ship regarding these issues we’ve criticized in the past, but the problem there is that it’s one season (or more, counting some parts of this season) held up against another six seasons of a demonstrated, sustained habit of neglecting the criticisms of many female viewers and critics. It’s one season of gestures towards a more even portrayal versus the six wherein it reveled in and made a centerpiece of rape and violence against women. I’m not saying people can’t change, but seeing as how it took so long for Weiss and Benioff to even start listening to women in general, I don’t want to wait around to see how long it’ll take them to start listening to people of color.

We already live in a world where Nazis and white supremacists are empowered and mobilized by a government that continues to ignore their already ever-present violence, prejudice, and hatred. Why try to present an “alternate reality” where the Confederates “won”? The last thing any of these already-delusional Confederate flag-flying, “It’s actually a heritage”-arguing, ignorant people need is to imagine what the country would be like with them in power.

If anybody needs empowering and mobilization from the media and entertainment industry these days, it’s people of color. It’s the black lives this show will no doubt trivialize in the name of “good television.”

“Wait and see” is exactly what everybody told us to do in 2016. If you think that’s a good enough excuse to run up the flagpole here in 2017, then bless your heart, dear.