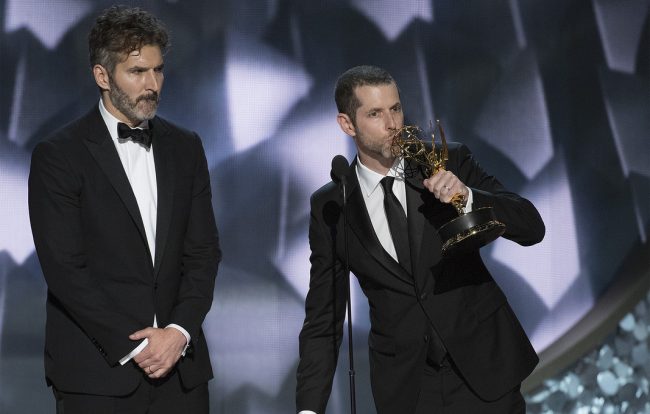 Yesterday, we talked about HBO’s announcement of their new show Confederate, which tells an alternate history of the United States in which the South secedes from the Union and slavery is a legal modern institution. It’s being made by the creators and showrunners of Game of Thrones, David Benioff and D.B. Weiss. The response was … not great.

Last night, Benioff and Weiss, along with the show’s announced writing team, Nichelle Tramble Spellman and Malcolm Spellman, gave an interview to Josef Adalian at Vulture. Unfortunately, the apparently rushed attempt at damage control didn’t go far in convincing those who had immediate reservations. To start, for a couple of self-proclaimed “history geeks,” the two executive producers don’t seem very familiar with the history they’re tackling.

If you can’t recall the name of the Battle of Antietam and first historian you name is Foote, you shouldn’t make a show about the Civil War pic.twitter.com/DLEUEPinvy

Remember, this is from an interview where they knew they’d be talking about these things.

I take back my cautious optimism. Benioff & Weiss should either pick up a book, or end the project. https://t.co/DFaj4w07ZS

The team also gave the usual “don’t judge it before you see it” plea. Nichelle Tramble Spellman said she thought some of the outrage was “a little bit surprising” and “a little premature.”

She said, “I do understand their concern. I wish their concern had been reserved to the night of the premiere, on HBO, on a Sunday night, when they watched and then they made a decision after they watched an hour of television as to whether or not we succeeded in what we set out to do … I would have loved an opportunity for the conversation to start once the show was on the air.”

But that’s not how these conversations happen anymore. Nor, for the most part, should they. As long as television shows and movies with atrocious representation keep getting made, people will continue to voice their concerns in advance. Benioff and Weiss do not have a great track record with issues of race and sexual violence (and I don’t see how you could make a show about slavery without sexual violence). We don’t need to give them another chance before we talk about the risks they’re facing.

In their own defense, they say here that they totally know the difference between “a show with a fictional history and a fictional world, and a show that’s an alternate history of this world.” They’ll take a different kind of care, then, with this show than they did with Game of Thrones. Which seems like a pretty flimsy dismissal of actual concerns audience have with the lack of care they’ve taken up until now.

The Spellmans, who are both black, took strong issue with the criticism they saw yesterday specifically targeting their race. A lot of people, especially on Twitter, saw them as HBO’s attempt at token legitimacy.

Despite the picture below, in the article you’ll note that they shoved the two black writers out front to defend this ridiculousness. https://t.co/wRjI0g4v3l

Malcolm Spellman insists “that there are no sellouts involved in this show,” and that they “are not props being used to protect someone else.”

He also seems to be addressing another concern no one is voicing. When asked what they think about the fear that “a show like this could end up as almost pornography or wish-fulfillment for white supremacists and the alt-right,” Spellman thinks the issue is that people are still imagining 18th-Century slavery, “So the idea that this would be pornography goes back to people imagining whips and plantations.”

He says, “What people need to recognize is, and it makes me really want to get into the show: The shit is alive and real today. I think people have got to stop pretending that slavery was something that happened and went away. The shit is affecting people in the present day.”

Which … is exactly what so many people were saying yesterday.

we already know what a legalized and modern institution of slavery would look like. it’s called the Prison Industrial Complex. #Confederate

How alternate is the history when our presidents right hand man is an admitted white nationalist?

We go ham over shit like this because that pain is not a thing of the past. It’s very much present in each of our lives, everyday.

So all in all no, this interview probably didn’t convince many people to watch who were already opposed to the idea. We’ll just have to wait and watch (or choose not to) what HBO ends up doing with Confederate.