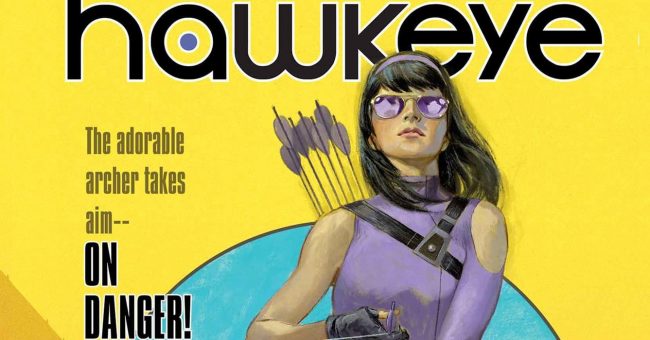 In 2016, novelist Chelsea Cain told her Twitter followers about the cancellation of Mockingbird, her ongoing comic. Despite the book’s end, she told them to make sure that Marvel made room for “more titles by women about women kicking ass.” What followed was a torrent of hate, threats, and other forms of online harassment that caused Cain to delete her account. 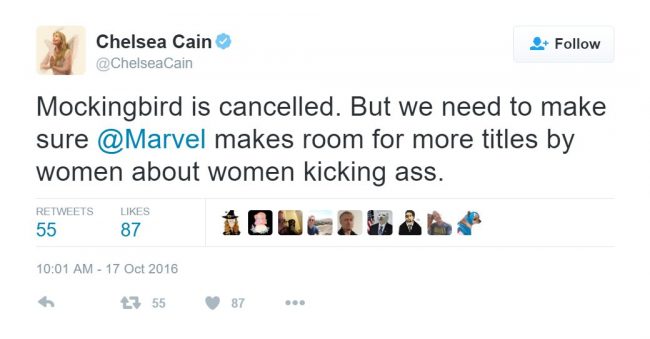 During the firestorm that erupted following Cain’s exit, Marvel’s Editor-in-Chief, Axel Alonso, affirmed the company’s continuing support for diverse creators and characters, but one question lingered: would Marvel do more than just talk?

Cain’s story isn’t uncommon. Just last year, Leslie Jones, Lauren Zuke, Paige Spiranac, and countless other women, people of color, and LGBTQIA+ people experienced sustained harassment on social media. Like Cain, many of them were forced away from platforms that gave volume to their voices. Harassment tells them that their voices don’t belong and aren’t welcome. Marvel asserting its support for diverse creators is important, but failing to take action against the trolls and harassers that actively try and impede those diverse voices would render their quest for diversity as merely hollow posturing.

With Kelly Thompson and Leonardo Roberto’s Hawkeye, Marvel is taking a clear stand against online harassment. It does so by legitimizing the experiences and emotions of those harassed online while also refuting the idea that harassment is normal behavior.

Kate Bishop, the titular Hawkeye, opens a detective agency on the West Coast. Her first client is Mikka Nguyen, a college student. Mikka, a person of color and a lesbian, tells Kate someone is stalking her online. This stalking—which includes name-calling and comments about how she should die—forces her to stop writing for her college newspaper and discontinue working on a fairly popular blog. 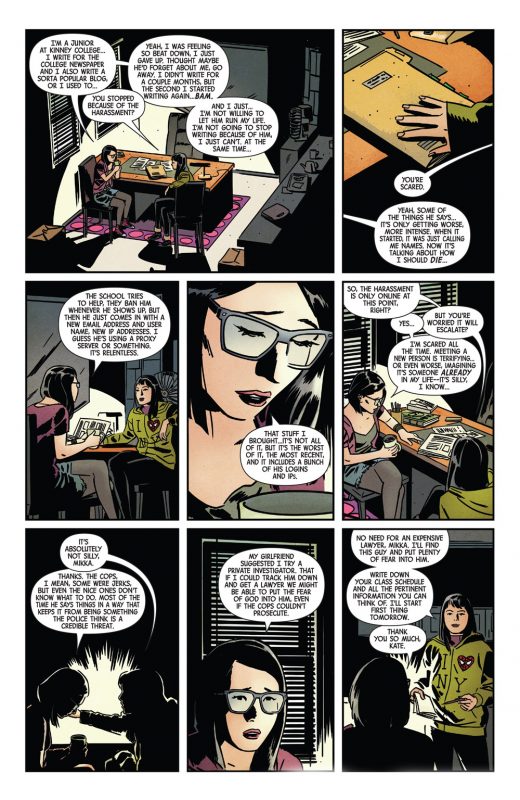 Marvel making online harassment a key plot point for one of its ongoing series is important for legitimizing the suffering online harassment inflicts in the real world. The online harassment of women has become a major problem on Twitter, Facebook, and other social media platforms. A study by the Pew Research Center notes that women 18-24 “experience certain severe types of harassment at disproportionately high levels.” While the statistics show that men and women receive equivocal levels of sustained harassment and physical threats, women receive much, much more sexual harassment, and are more likely to be stalked. Despite the prevalence of online harassment, many women are unable to get help, often finding their fears and frustrations delegitimized. Women are told to get off the Internet, which directly asserts that their voices don’t matter and that the Internet is a domain belonging to men.

Mikka falls right within that 18-24 age range of women who experience severe harassment, and her experiences so closely reflect the reality of online harassment. What makes Hawkeye powerful is that Kate accepts and validates Mikka’s fears and anxieties rather than dismissing them. Kate doesn’t tell Mikka to get off the Internet or assert that she is weak for being afraid; Kate tells Mikka that her fears aren’t silly. Emotional and experiential validation is powerful, especially for those who’ve experienced online harassment. This interaction tells all victims of online harassment that there are people who do care and who do want to help. Validation informs them that their feelings and anxieties aren’t wrong.

Though there’s still so much work to do in bringing the voices of women, people of color, and LGBTQIA+ people into comics, Marvel has asserted that real heroes don’t harass, accuse, belittle, or blame victims: they help and support them.

Liam Nolan is a freelance writer who once thought an MA in English would be a great career choice. He currently works as the Section Head for Small Publishers at ComicsVerse.com. Find him on Twitter @LiamDNolan.