Since when is harassment acceptable practice for being a fan of a thing? Anything? 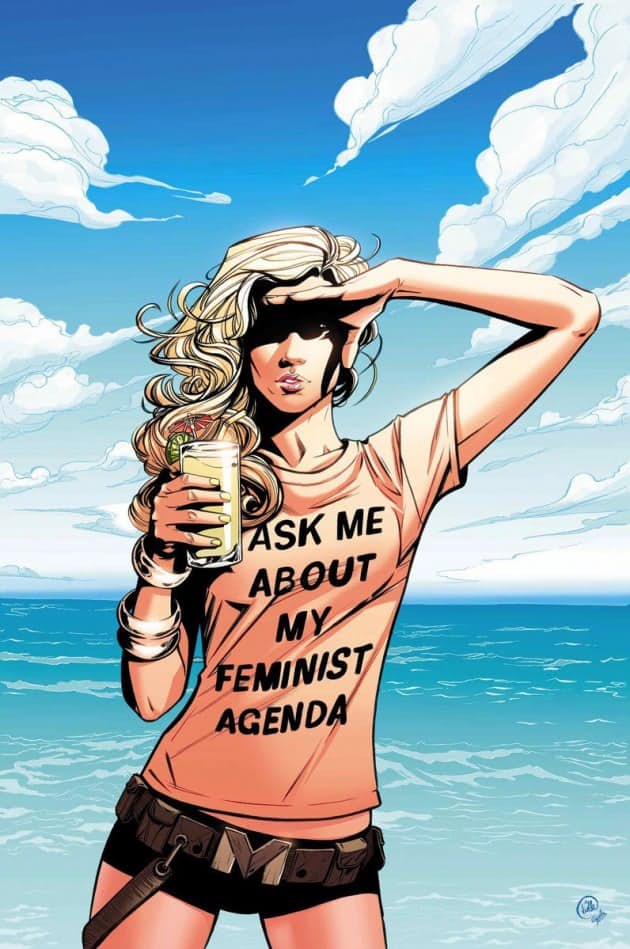 On Thursday, Mockingbird writer Chelsea Cain quit Twitter after receiving an onslaught of abuse from individuals calling themselves comic book fans. Her crime? Asking for greater representation in her field of work. “Please buy Mockingbird #8 this Wed. Send a message to @marvel that there’s room in comics for super hero stories about grown-up women,” she wrote in a now deleted tweet, according to the Oregonian.

She didn’t attack anyone, nor did she alienate fans. She made a simple request to buy her latest issue in the hopes that it would lead to Marvel producing more comics about adult women—an issue that put Mockingbird‘s already obvious feminism front and center on the cover, seen above. Apparently, that was enough of an invitation for people to hurl personal attacks as well as insults at her work until she finally deleted her account. She wrote a lengthy explanation over on her website, detailing how the small but loud fraction of toxic comic book fans has turned her Twitter experience negative over time.

But as comics writer Nick Spencer pointed out, when the gender-based disproportionate response to the harassment of different creators was brought up, this is nothing new. Attacking female creators has somehow become commonplace in fandom, to the point where some people (wrongly) view it as just part of the job. Comics writer/our hero Gail Simone went on a characteristically awesome Twitter spree over the cover, as well.

Ask me about my feminist agenda. pic.twitter.com/Rmd5FegcEs

Remember what happened with female video game creators during #Gamergate? A woman navigating the internet is kinda like the game Pac-Man: You try to avoid these creatures who sometimes look like ghosts (or Twitter accounts with egg icons) wanting to eat you alive as you run toward your goal, but what is the reason for that? Why is so much vitriol hurled at women? In the comic book world, at least, there seems to be this idea that it’s a place for men and anyone who threatens that must be taken down. Case in point, Spencer got involved in a back-and-forth with one user who wrote “We have more right to this industry than any other group” before adding, “Women have novels. They don’t need to take over comics as well.”

Dear fragile cis het white men threatened by the possibility of not being the center of the universe for once: not everything is for you, by you, or even about you.

Yes, talented men like Alan Moore, Stan Lee, Frank Miller or Neil Gaiman may dominate the conversation, but badass women like Wonder Woman editor Alice Marble, The Cat’s Linda Fite and Marie Severin, Constantine writer Lauren Beukes, artist Jo Chen, Marvel editor Bobbi Chase and so many more have always been a part of this business—albeit in smaller numbers. However, much like the world, the industry is finally realizing that women make up half the world’s population and half the comic book readership. That’s not some “feminist agenda,” that’s just a business recognizing their audience isn’t so skewed toward white men. Moreso, it’s realizing that people of color also have a place in this world.

That doesn’t mean a Riri Williams will suddenly erase Tony Stark’s existence; it’s just giving her an opportunity to tell her own story. In that same vein, Miles Morales and Spider-Gwen have not stopped new stories about Peter Parker from being written, so just stop. Step away from the keyboard, take deep breaths, and get a grip on reality.

To me, fandom means reveling in something you love and getting excited about it with other people. So yes, feel free to love Steve Rogers as Captain America or Bruce Wayne as Batman. With that said, it doesn’t mean you suddenly own—or have ever owned—the comic book world, nor does it give you the right to go into attack mode every time someone different comes along. So maybe stop attacking women creators now?