Yesterday, I wrote about the racist and sexist harassment inflicted on Ghostbusters‘ Leslie Jones, which was both participated in and encouraged by self-proclaimed “most fabulous supervillain on the internet” Milo Yiannopoulos. Now Twitter, after being called upon not only by Jones, but by fans and other victims of online abuse through their platform, has finally permanently banned Yiannopoulos, shutting down his account for good.

People should be able to express diverse opinions and beliefs on Twitter. But no one deserves to be subjected to targeted abuse online, and our rules prohibit inciting or engaging in the targeted abuse or harassment of others. Over the past 48 hours in particular, we’ve seen an uptick in the number of accounts violating these policies and have taken enforcement actions against these accounts, ranging from warnings that also require the deletion of Tweets violating our policies to permanent suspension.

We know many people believe we have not done enough to curb this type of behavior on Twitter. We agree. We are continuing to invest heavily in improving our tools and enforcement systems to better allow us to identify and take faster action on abuse as it’s happening and prevent repeat offenders. We have been in the process of reviewing our hateful conduct policy to prohibit additional types of abusive behavior and allow more types of reporting, with the goal of reducing the burden on the person being targeted. We’ll provide more details on those changes in the coming weeks.

In an interview with Conservative site Heat Street, when asked if he regretted his part in the trouble Jones faced on Twitter, Yiannopoulos responded by saying, “No, of course, I don’t have any regrets. But feminists on the other hand should have regrets that they have taught strong women that they are victims and attacked people for having different opinions to them on Twitter.”

Because refusing to back down when people are coming at you with racist or sexist comments, screencapping them to report their behavior to appropriate authorities, and encouraging others to stand up for themselves is the textbook definition of “victim.” Also, I love how Yiannopoulos calls blatant racist epithets “different opinions” on Twitter. As if one could have a mere difference of opinion as to whether or not a particular group of people deserves to be dehumanized.

Meanwhile, Yiannopoulos followers who completely misunderstand the First Amendment have started a #FreeMilo campaign (Free him from what, exactly? Twitter did set him “free.” They didn’t want to hold onto him. That’s entirely the point. Let him spout his opinions elsewhere. He has the freedom to do that), implying that somehow not allowing Yiannopoulos to use Twitter is the equivalent of the government dictatorship in North Korea. (This from many of the same Conservatives who would never want government telling corporations what to do or how to run their business. I guess Twitter doesn’t count as a private business? Except, oh wait, it does.)

Yiannopoulos insisted on Twitter that he himself did not say anything racist to Jones. That actually he’s the victim here, because all he did was review Ghostbusters and not like it (based on completely sexist beliefs about what women “should” be versus what they actually are), and now he’s being blamed, poor baby, for the actions of his followers. As reported by Buzzfeed, he made the following statement:

“With the cowardly suspension of my account, Twitter has confirmed itself as a safe space for Muslim terrorists and Black Lives Matter extremists, but a no-go zone for conservatives.
Twitter is holding me responsible for the actions of fans and trolls using the special pretzel logic of the left. Where are the Twitter police when Justin Bieber’s fans cut themselves on his behalf?”

Speaking of zero logic, there’s a big difference between the current situation with Jones and that unfortunate Justin Bieber situation. In the case of the latter, 1) it was a hoax that started at 4Chan, and 2) it was people doing something of their own volition. They weren’t attacking Justin Beiber. They weren’t attacking those with mental illnesses (though as many said at the time, a hoax like that is horribly insensitive to those who’ve actually had trouble with cutting themselves).

In this case, there was targeted harassment of Jones based on her race and her gender. That’s literally what constitutes hate speech.

And though he insists that he said nothing racist, both the above tweet and this one are exactly that: 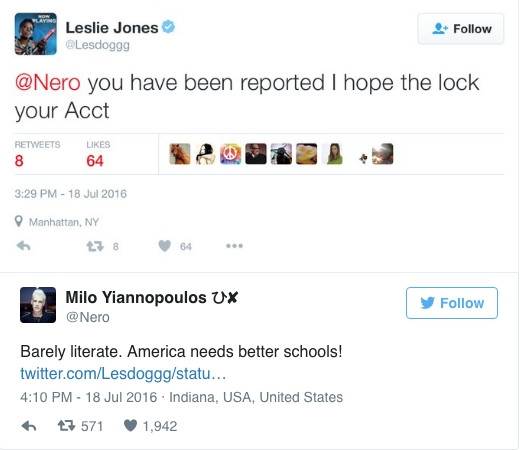 Calling Jones a “black dude” and “barely literate” when she makes a clear typo is steeped in racist coding. Because a woman who looks like her “isn’t really feminine.” Because “those people” are barely literate. Racists don’t always start their sentences with “I’m a racist, and I think that…” They don’t have to. The subtext is clear.

But even ignoring that. Even giving him the benefit of the doubt and saying that he didn’t say anything explicitly racist (which he didn’t, very purposefully), that isn’t why he was banned. He wasn’t banned for what he said. He was banned for the behavior he orchestrated that culminated in Jones being harassed.

He admits that he is inflammatory. Takes pride in it. If he can admit that he’s inflammatory, he knows that he holds a certain sway over people, too. You don’t get to have that many followers and a platform like his and not know that. For him to suddenly play dumb now and pretend like he was just minding his own business when all of a sudden his followers started running amok is disingenuous and hypocritical.

What’s funny is that in his own Justin Bieber analogy, people did call on Bieber to speak out against the hashtag in order to stop actual cutters who thought they were helping from engaging in the behavior. He never did. And people were pissed. People also criticized Bernie Sanders for not speaking out against the actions of “Bernie Bros” (even though he did). Because when you have a platform, and your followers do things in your name, in your defense, or somehow inspired by you, you have a responsibility to at least say something to try and rein them in. You don’t want that responsibility? Give back your platform.

The fact that Yiannopoulos only speaks up when he’s being accused of racism, or when people attack him is very telling. Because standing by while others make racist comments, sexist comments, and continually harass someone around you is tacitly contributing to the behavior. Plain and simple.

It reminds me of the behavior of another prominent Conservative who’s currently the Republican nominee for President of the United States. In a jaw-dropping segment on her show on MSNBC earlier this year, Rachel Maddow broke down just how this particular candidate actively encouraged a level of violence against protesters of color in a clearly calculated way:

Yiannopoulos engages in the same tactics, baiting his followers with inflammatory language, allowing them to harass others unchecked, then being very careful to maintain plausible deniability. You’ll notice that Twitter hasn’t been willy-nilly banning Yiannopoulos’ followers. They’re certainly easy enough to find if Twitter were as hell-bent on quieting Conservatives as they claim. They banned him. Because he’s the one with the sway. He’s the one that can inspire people with certain “opinions” to action that can be harmful. Without people like him, the sheep are aimless. And harmless. Or, rather, less harmful.

(via The Daily Dot, images via screencap)