Does Hawkeye Tie Into Spider-Man: No Way Home? 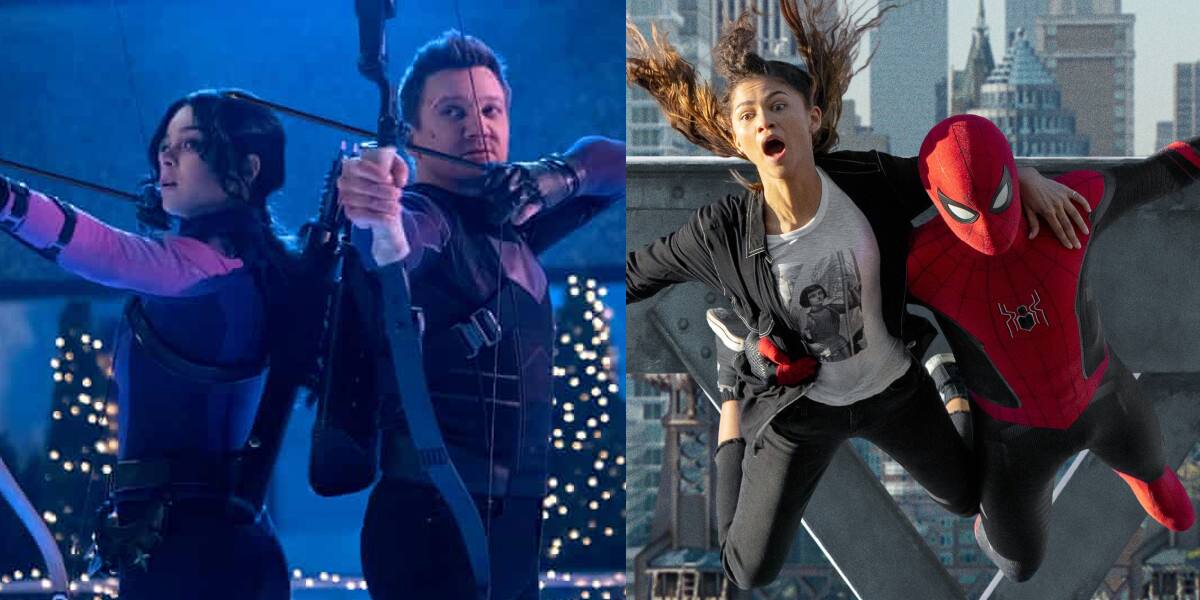 The joy of having so much content from the Marvel Cinematic Universe is that they sometimes lead right into each other. For instance, the fifth episode of Hawkeye dropped this week right before the theatrical release of Spider-Man: No Way Home—much like how The Mandalorian gave a little Easter egg into Star Wars: The Rise of Skywalker, fans want to know what Hawkeye did to clue us into some stuff in No Way Home.

To be honest, it wasn’t anything as big as the Force healing reveal from The Mandalorian, but there were some fun moments from Hawkeye that made viewing No Way Home that much more exciting, so let’s get into it!

**Spoilers for Hawkeye episode 5 “Ronin” and Spider-Man: No Way Home lie ahead.**

The first callback to Hawkeye comes within the first few moments of the movie. As Peter is swinging himself and MJ to safety, he swings past a billboard for Rogers: The Musical, the reason that Clint Barton is in New York City in the first place. And while that is just connected to Hawkeye in the larger sense, there are also connections to the most recent episode, “Ronin,” as well.

There is nothing I want more in this world than to go back in time and see “Ronin” first and then head into seeing No Way Home, because getting a glimpse of Vincent D’Onofrio as Wilson Fisk in Hawkeye before getting to see Charlie Cox’s return as Matt Murdock just feels like it would have been absolutely incredible. While we knew Cox was returning at some point, I think seeing Fisk would have clued me into the fact that he was for sure in No Way Home more than the whispers we’d heard online.

During “Ronin,” we heard about the newly renovated Statue of Liberty, something that seemed strange to hear but not really get into, and then, while watching Spider-Man: No Way Home, it is clear that it was renovated for the second time because in No Way Home, Peter brings all the villains there to fight because it is away from everyone and is also somewhere easy for them to set traps for each of the villains they’re taking down.

That version of the Statue of Liberty (while being fixed to add Captain America’s shield) gets destroyed by Peter Parker, so Hawkeye referencing it being new is a little fun tie back to No Way Home!

Both do also, in theory, end up at Christmastime because when all is said and done, Peter Parker is celebrating Christmas by the end of the movie. And we know that Hawkeye takes place in the six days leading up to Christmas. So, happy for me that Spider-Man: No Way Home is technically a Christmas movie (no, I will not be taking questions about this at this time).

So while there isn’t some obvious large connective tissue like with The Mandalorian and Rise of Skywalker, there are still little moments that are more fun having seen “Ronin” first.