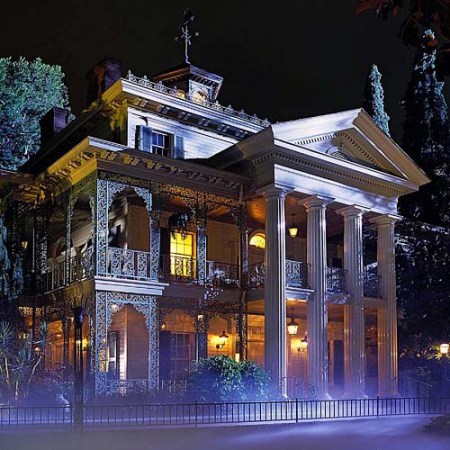 Who wants to go in on a time share with me? I get all of October.

Based on the attraction from Disneyland, The Magic Kingdom, and Tokyo Disneyland, the replica was built by designer, Mark Hurt. According to the listing:

Mark, a Disney Contractor and owner of the company Constructioneer, built this home in 1996 inspired by the Disneyland Haunted Mansion down to the finest of details. After knowing this was the community Hurt wanted to live in, he had the chance to build his home in the Garden District of the neighborhood. Well, after Mark was shown eight stock home designs by the architect, he didn’t want just any home, he wanted his to be different. Mark approached the architect about building a house modeled after the Disneyland Haunted Mansion since it fit with the New Orleans style homes in the neighborhood, and from there a spark had ignited.

So why would someone who put all the work into something so specific put it on the market? “Hurt is selling the home because he has moved on to an even more ambitious project, but hasn’t stopped designing and building unique Disney inspired buildings,” cites the listing. “Mark is working on his current project of a resort themed house modeled after Disney’s Grand Californian along with a replica of Walt Disney’s backyard barn and a pool that will be themed to the Jungle Cruise.”

Interested in buying? The replica isn’t tricked out like the Disney attraction but does have some great perks.

There is one spooky thing about the house though. Hurt made one of the bathrooms haunted. When you turn on the faucet, the lights flicker, a ghoul appears in the mirror and a voice from the attraction comes through hidden speakers. Check out tons of pictures on the Ebay listing and watch this video for a short tour.