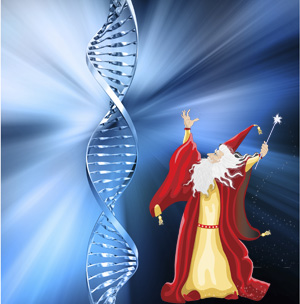 Magical ability could be explained by a single autosomal dominant gene if it is caused by an expansion of trinucleotide repeats with non-Mendelian ratios of inheritance. – Andrea

Biology major Andrea admits she was not a biology major yet when she read the Harry Potter books. So it is only recently that she’s come across J.K. Rowling‘s statement that the wizarding gene is dominant (that is, it’s much more likely to be passed from parent to child, and much less likely to be present in the genome unexpressed). Andrea also noticed the confusion surrounding Rowling’s statement, with a lot of folks seeming to think that the author had gotten one of the basic foundations of genetics wrong. If the wizarding gene was dominant, how could you explain muggle-borns, wizards born to non-wizard parents? And how to explain squibs, the rare non-magical offspring of wizard parents?

Andrea wants Rowling to know that she’s got her back, and sent her a six page scientific paper supporting her claim. Fortunately, she also shared it with the internet. And while I would be the first to admit that I don’t remember much from AP Biology and have a childish enjoyment of the simplicity of the Punnet square, I believe this is the crux of her argument:

The Huntington’s Disease Collaborative Research Group (1993) proved that the disease was caused by CAG (cytosine-adenine-guanine) trinucleotide repeats.  The Huntington gene is dominant and autosomal (not linked to sex chromosomes).   Normally, a person has 11 to 34 CAG repeats in the gene of interest, which causes the transcription of the normal huntingtin protein.  Unfortunately, when an individual has 42 to over 66 CAG repeats, the abnormal huntingtin protein transcribed causes serious symptoms later in life… Trinucleotide repeats are inherently unstable, so DNA replication errors, such as slippage, are more likely to occur… With the huntingtin gene, some individuals can have an abnormally high amount of repeats but still be phenotypically normal… If 100 repeats are necessary for the gene to be of the magical dominant allele variety, the recessive non-magical, or muggle, allele type might only contain about 50 repeats.  So, within a range, most muggles have about 50 trinucleotide repeats, but like any other trait there will be variation and some muggles might have 90 repeats and still be phenotypically non-magical.  Muggle-borns are caused by spontaneous mutations.

There you have it (with a lot of specifics that I’ve cleared away with elipses but that you can read right here): a dominant wizarding gene that nevertheless can be expressed in the children of people who show no ability for magic. Andrea goes on to show how the nature of trinucleotide repeats could also explain the occasional birth of some much more magically gifted witches and wizards as well as squibs, and even drive a nail in the coffin of the assumption that “pureblood” wizarding lines are dramatically superior to witches and wizards more closely related to muggles. Okay, here are some more cool quotes:

Despite their different heritages, their mutations make [squibs and muggles] genetically similar.  This suggests that [squibs’] limited ability to interact with the magical world (seeing Hogwarts and dementors) might be environmentally influenced, rather than genetic.  Cross muggle-wizard adoption studies could provide evidence for this hypothesis…

PS.  Please sign the enclosed picture so I can frame it and tell everyone the story of how I sent JK Rowling a six page scientific paper about wizarding genetics.

This last quote was followed by Andrea’s fifteen item bibliography, which, by the way, only includes one Harry Potter book. So now everyone please go look at the six page scientific paper she wrote on wizarding genetics for J.K. Rowling, because it’s an awesome story.