And here you thought all the Harry Potter fun was over. (At least until they reboot the film franchise, anyway.) Warner Bros. has been working on two projects sure to excite fans. A secret mini-film has been shooting while a Harry Potter shop has opened at King’s Cross station in London between, you guessed it, platforms nine and ten.

Why are new scenes being filmed after the release of the last Harry Potter installment? For theme parks, of course!

The Sun reports Helena Bonham Carter, who played Bellatrix Lestrange in the films, was back to reprise her role. Their source said, “The cast have really enjoyed getting back together — they are so tight-knit,” leading us to believe others have returned as well. But whether that includes the main trio is still to be determined.

The new scenes will find a home at The Wizarding World of Harry Potter in Florida as well as similar attractions in California and Japan in the next few years.

Meanwhile, a snazzy new shop has opened at King’s Cross station, the location of the fictional Platform 9 3/4 from J.K. Rowling’s series. The platform has actually been marked for the last few years but actor Warwick Davis was on hand this past weekend to celebrate the grand opening. Here’s a shot of the store from The Independent: 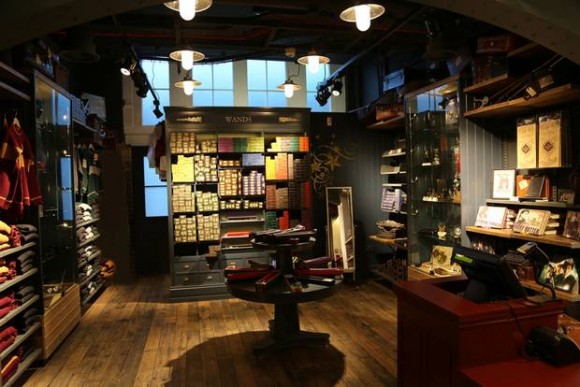 (via Digital Spy and io9)