Harry Potter DVDs Not Disapparating in Exactly The Way We Thought 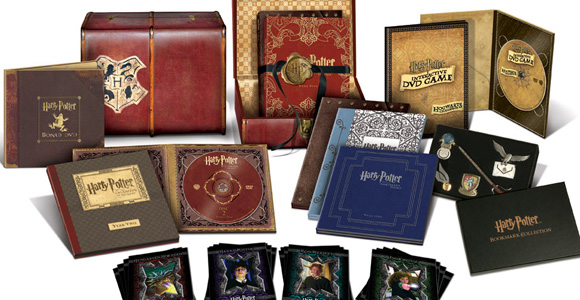 Earlier this week we told you Harry Potter DVDs would “soon disappear from shelves” (Warner Bros. words, not mine) to make way for what would mostly likely be all-new special editions with limited availability down the road. We didn’t need Professor Trelawney to tell us fans would freak out. They did. That’s why Warner Bros. has come out to clarify their original announcement.

The big move, which will include the soon-to-be released Harry Potter and the Deathly Hallows Part 2 and Harry Potter: The Complete 8-Film Collection, is set to start December 29, 2011. But Jeff Baker, senior vp and general manager of Warner Bros.’ Theatrical Catalog says fans can breathe easy, while WB will stop shipping new product on that date, it will still be available for some time.

“Even though there could be a sense of urgency from the consumers’ perspective, there will be Potter product come the first of the year,” he told Entertainment Weekly. “But over time, they’ll be less and less of that inventory. At some point, whether it’s next April or May or June or July, it’ll probably be very difficult to find Harry Potter product, especially if you’re looking for the third movie or the fifth movie, for example.”

Fans are still likely to drop everything and head to the stores but Harry Potter will still remain available for video-on-demand and digital download. Once the stores or online retailers stock of physical copies of DVD and blu-ray are gone though, that’s it for those particular versions.

But of course, for those that want physical discs and the very specialist of special features, Baker has a broad timeframe for us. “There is discussion internally about aggregating assets from all of these films over the last decade and adding some new things — we’ve never done an Ultimate Edition on the final two films — and doing some grand kind of piece,” he said. “It could be the end of 2012 or the beginning of ’13.”

“The idea is not to let Harry Potter dissipate. There are exhibits around the world. There’s the Harry Potter World [i.e. The Wizarding World of Harry Potter] in Orlando,” says Baker. “There are a lot of things that are Harry Potter that are going to be available to consumers well into the future, and we certainly want a home entertainment component to those grand plans.”

What say you, Potter fans? Does this clarification ease some of your worries?