Attention Everyone: The Dog Version of Sirius Black is Up For Adoption 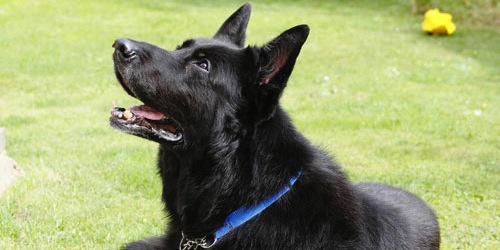 Meet Berry. You might have seen him before? Berry is the highly trained animal performer who represented Gary Oldman‘s Sirius Black’s Animagus form in Harry Potter and the Prisoner of Azkaban. In other words, this ten year-old puppy is Padfoot.

But Berry has a problem. His owner no longer has the time to care for such an energetic, intelligent, and aging companion, and so he’s currently staying at a foster home run by the UK’s German Shepherd Dog Rescue. In the meantime, he’s looking for a brand new permanent home.

There’s just one catch: if you want Berry, you’ve got to adopt his lifelong buddy Porridge.

Berry and Porridge are actually both movie stars, as Porridge had a role in White Teeth, a television adaptation of the novel of the same name. Obviously this isn’t a catch in the traditional sense, but we understand that caring for a very intelligent 10-year-old and 13-year-old german shepherd isn’t everybody’s cup of tea. Still, we’re amazed that some animal loving Harry Potter fan hasn’t already trotted these two off to a loving home.

Maybe one of you can? Look at this face:

Even if he’s ten years old, I’m sure Berry would be terribly excited to walk with you to the train station, no matter what Draco says about it, as long as it’s not too far. You can find out more about him at the German Shepherd Dog Rescue site.