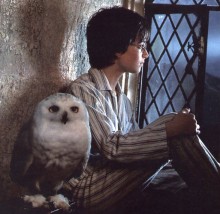 Jairam Ramesh, Indian Environment Minister, feels the degrading wild owl population in India is because of Harry Potter fans who attempt to capture the birds as pets in order to be more like the wizardly hero. Yep.

In response to a report given by wildlife group Traffic entitled, “Imperilled Custodians of the Night,” Ramesh said, “Following Harry Potter, there seems to be a strange fascination even among the urban middle classes for presenting their children with owls.”

Traffic also reported that, owls are used as sacrificial subjects in black magic rituals, including a multitude of their body parts, such as their skulls, eyes, and heart. To make matters even more ridiculous and the situation more dire for owlkind, apparently, parents are attempting to capture wild owls for their Harry Potter lovin’ children.

Maybe India’s owls could benefit from a set of heroes.

(AFP via Movieline via A.V. Club)