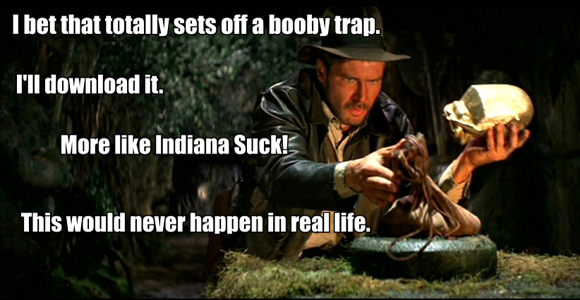 Nothing makes you sound like an old curmudgeon quite like talking about how things were better in the old days. But Harrison Ford can do what he wants. He’s Harrison Ford.

Ford recently did an interview with the New York Times in which they got to talking about his past classics:

You just got back from Comic-Con, where you were promoting “Ender’s Game.” So many of the films you did early in your career, like “Star Wars” and “Raiders of the Lost Ark,” would have been perfect films for that kind of fan-driven event. Do you think those movies would be received differently if they came out in today’s environment?

Everyone would be ahead of it, and everybody would know what it was, and it would be no fun at all. But people still went to movies in those days. People went to movie theaters. It was a community experience, and that was part of the fun. Now people see a movie on their iPad, alone, with interruptions for snacks.

No fun at all? Ouch. I guess he missed all those people camping out, in costume, for Star Wars: Episode I – The Phantom Menace. Or maybe that was still long enough ago in his mind, but I can imagine people are going to be pretty excited to see the new Star Wars films in theaters in 2015. Though I do see his point about viewers knowing a lot more before going into a theater than they used to. Sometimes I wish I could go in fresh.

Ford also seems to have a very sterilized view of what Comic-Con is. “It’s another form of engagement,” he told them. “I think the success of Comic-Con is based on the partnership between the fans and the service providers, the entities — I won’t necessarily call them filmmakers — that supply the film product that supports their particular interest, whether it’s vampires or science-fiction fantasies or Transformers or whatever is going on.