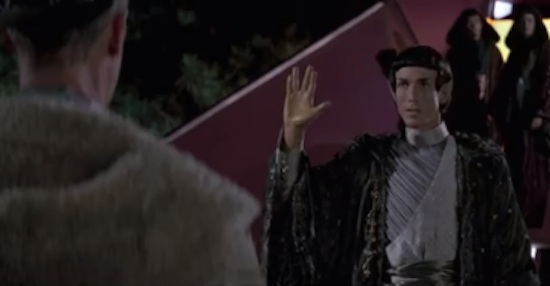 Alright — technically speaking, First Contact Day is a fictional holiday celebrating the first communication between humans and vulcans in the Star Trek Universe. Even more technically speaking, it won’t be a thing even in that fictional universe for another fifty years. A couple of trivial details like that aren’t going to stop us from celebrating, though, because any holiday that celebrates advanced technology, communication with other sentient races, and the beginnings of mankind getting off this lovely rock that’s been so good to us to seek our destiny among the stars is one worth marking in our book. Call it an aspirational holiday — one where we celebrate not what we’ve accomplished, but what we might one day.

According to Star Trek lore, April 5, 2063 was the day that washed-up, cantankerous old nutter Zefram Cochrane proved he wasn’t so washed-up after all, though he was exactly as cantankerous as he seemed. Cochrane (with a little help from the time-displaced crew of the Enterprise-D) piloted the first warp flight from Earth, attracting the attention of a passing Vulcan ship and alerting human beings to life on other planets for the first time.

In real life continuity, of course, we’re probably more than a few decades off from light speed travel, and wagering on when we might meet other intelligent life in the universe is a sucker’s bet. On principle, though, we’re eager to celebrate a day that represents the things we love about Star Trek — the acknowledgment of technology as a means of improving the state of humanity, rather than an end in itself. The sense that though the world we live in is far more vast than we comprehend, we can all play a role within it. The idea that real progress comes through working with those who are different than us and letting their strengths complement our own weaknesses.

It’s a big, wide world out there, folks, and while the steps we’re taking into it may be little, they’re still steps worth admiring in the hope that one day, they’ll lead to something bigger, even if we may not be around to see it. For what it’s worth, though, I really hope we are, because it’s going to be amazing, whether it has pointy ears or not. Live long and prosper, everyone.