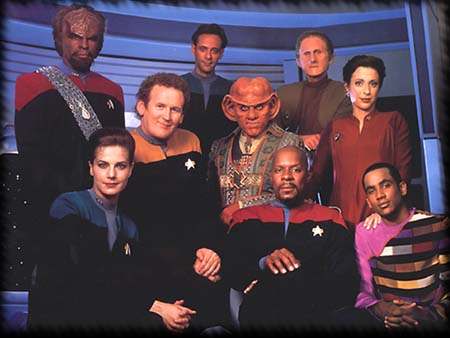 Has it really been two decades already? On January 3, 1993, Star Trek: Deep Space Nine made its debut, making this the twentieth birthday of perhaps the most underrated show in the Trek canon. Just one more year until the show can go out for drinks with friends at Quark’s Bar and wake up with no eyebrows and a throbbing Romulan Ale hangover. Until that embarrassing incident, allow us to make a brief argument for the show, and why you should spend this evening getting reacquainted with it.

Deep Space Nine‘s seven seasons are often overshadowed by it’s more popular progenitor, Star Trek: The Next Generation, but it’s largely unfair to compare the two, even if they do share some of the same characters. DS9 is not your typical Trek, and doesn’t apologize for it. The titular space station where the show takes place is dark and grimy, broken down and foreboding, populated by fugitives in every bar booth and spies lurking in every shadow. Deep Space 9 is the Gotham to the Enterprise’s well-lit Metropolis. Things are more uncertain on the station — the Federation is invited in as a peace-keeping force, but for once, doesn’t run the show, instead having to balance its own interests with local issues. DS9 exists largely in grey areas — alliances are shifting, loyalties are unsure, and politics and religion collude to make for strange bedfellows. There are more moving parts in DS9, and things aren’t as simple as they often are in (the very excellent in its own right) TNG, lending the series a sometimes almost noir-inspired feel.

There are plenty of great episodes to choose from if you’re revisiting the series — “Trials and Tribbleations” comes to mind right off the bat, as does the strange and excellent “The Visitor” and pretty much anything that can be described as a “Quark and Odo episode.” If you’re not familiar with the series, though, don’t just dive in. You wouldn’t start a great book in the middle, and DS9 deserves a good watch through. Watching piecemeal is a good way to deprive yourself of seven seasons of deep continuity, evolving relationships, and of a fair share of pretty spaceship battles.

The whole series is, of course, as close at hand as your Netflix account, which makes tonight a perfect night to put on some popcorn, slip into the Wayback Machine, and begin one of sci-fi’s great series all over again.