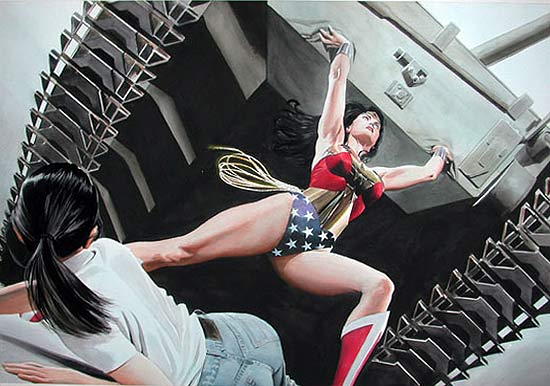 Who would have guessed that Wonder Woman and William Shatner would share a birthday? It could even be intentional, except that the Shat was ten when she debuted in December 1941.

But wait, you say, if her first comic came out in December, why is her birthday in March? Well, for the same reasons that Lex Luthor has now canonically stolen 40 cakes: little known apocryphal published tie-in materials. Like this calendar:

So, we apologize for the quality, but we wanted a video of Wonder Woman kicking ass, and this was the only one we could find that illustrates the raw power unleashed when you stick a mind-control device on the Champion of the Amazons. The other heroes in this Justice League Unlimited clip (Huntress, Black Canary, Vixen, and Hawkgirl) are by no means lightweights themselves. Huntress and Canary are some of the most skilled hand-to-hand combatants on the show, and Vixen and Hawkgirl are relative bruisers.