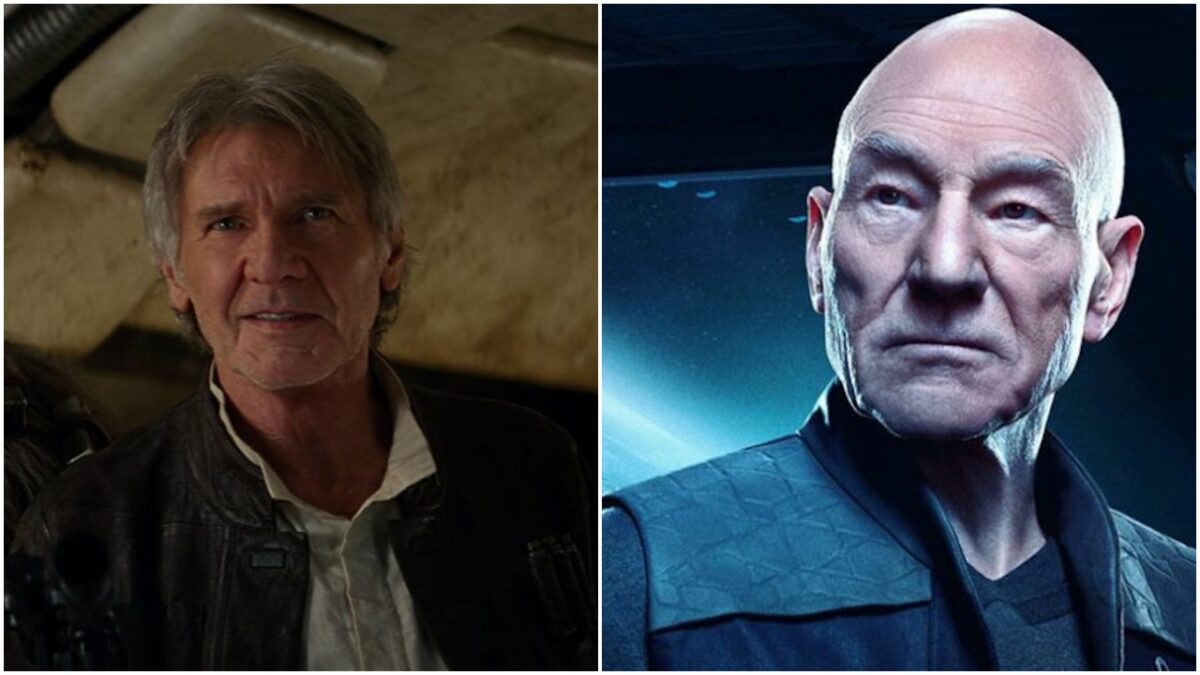 It’s a rare day when we can celebrate the birth of not one, but TWO legendary starship captains, but apparently Cancers make great space pilots, or at least, great actors, as today is Harrison Ford’s 78th birthday and Sir. Patrick Stewart’s 80th.

Ford and Stewart and sort of like two sides of the same coin. One is the embodiment of American masculinity in the best way possible, while still channeling intellect, humor, and verve, while the other is the ultimate British gentleman, a Shakespearian force of pure dignity that none the less can kick some ass and give a great hug. Both are iconic.

It’s somewhat fitting that these amazing guys share a birthday. Though their careers have taken different trajectories, they’ve both embodied multiple iconic characters in genre, and continued to act and be generally awesome for decades. Ford isn’t just Han Solo, he’s Indiana Jones. Stewart isn’t just Picard, he’s Professor X. And they’re also both so much more. And we love them.

Both of these men have shaped our pop cultural lives for decades and deserve to be celebrated as much as possible. We can’t throw a party (though I will be eating cake) but we can share some Twitter love.

I notice Harrison Ford is trending, which is all the excuse I need to remind the world of the time he dressed up as a booze-carrying nun for Halloween.
Happy 78th birthday, Mr Ford!#HarrisonFord pic.twitter.com/ixlMJaHrkr

Happy birthday to #HarrisonFord. I’ll always be there to pick up your jacket for you buddy! Rawrrgh! pic.twitter.com/ber1irxALV

SHOUT OUT to a certain friend for no particular reason other than being the best Harrison Ford he could possibly be. 🎂 pic.twitter.com/qQ5XAZskl4

Oh to have been a fly on this wall …

Happy 80th Birthday to Sir #PatrickStewart and Happy 78th Birthday to #HarrisonFord. Here is the only picture I could find online of the two of them together. pic.twitter.com/a1TcoFdpOn

Happy 80th Birthday to Sir #PatrickStewart and Happy 78th Birthday to #HarrisonFord. Here is the only picture I could find online of the two of them together. pic.twitter.com/a1TcoFdpOn

And for Sir Patrick, what better tribute than some sonnets?

Sunny and my team took over for my birthday, and arranged this gift for today’s reading: Sonnet 81 by @IanMcKellen. Thank you, dear Ian. #ASonnetADay pic.twitter.com/VKWTEoLkXb

Here are a few other party favors: