Hanson Are Launching A Beer Called MMMHop. Wait A Minute, When Did They Get Old Enough To Drink? 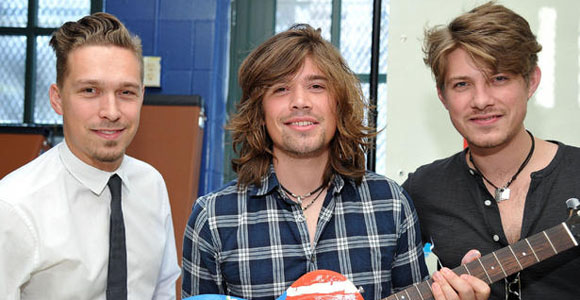 Oh the bygone era of 90s pop music. You can reminisce fondly or look back and cringe, it was what it was. Remember Hanson? You know, Isaac, Taylor and Zac. People LOVED them. Still do. But of course their biggest hit to date was their first, 1997’s “MMMBop.” And now that they’re all grown up they’ve decided to add something else to their repertoire – beer! MMMBeer…

According to The Star, the trio are developing an India Pale Ale and plan to release it early next year. Speaking at a university (where else shop your alcoholic beverages?) Zac said, “We of course make records, they are fundamental to what we do, but we wanted to create a brand so that our fans have a greater experience. What is vital is that Hanson merchandise is quality and not made solely with the purpose of profit.”

He continued, “We have a board game and even a record player to play our last record on, but we will never make dolls, lunch boxes or toothbrushes that play our songs for example.” Well, not for nothing guys but I still have my New Kids on the Block Jordan doll.

“It’s vital our fans have trust in everything Hanson do. In fact we are soon going to be selling our own beer, I’m not even joking,” said Zac. “MMMHop IPA anyone?”

I’m not sure how creating a branded beer or board game for yourself is any better than a lunch box but either way, this is hilarious and I know more than a few people still obsessed with Hanson who would drink it.