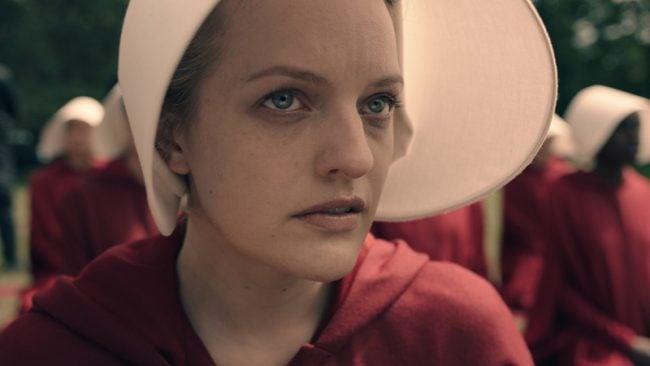 We had a chance to screen the first three episodes of highly anticipated Hulu series The Handmaid’s Tale and I can’t recommend it enough. With Margaret Atwood’s original novel gaining a generous amount of renewed interest in recent months—even leading to an Audiobook extension—this series has been hyped as a mirror to the current attack on civil rights and reproductive rights. This dystopia, where a Christian fundamentalist takes over the United States, has terrifying echoes to the current moment, and while a dictatorship isn’t necessarily going to force a class of women to serve as birth-givers for the ruling in response to a “plague of infertility” anytime soon, it’s a necessary reminder that normalizing a “slowly heating bath tub” will leave you dead.

One of the biggest challenges the adaptation likely faced was taking a story that, in the novel, exists so much in the protagonist’s mind and making it accessible. Another challenge just within the genre is to introduce the viewer to this world without an excessive amount of talk-y exposition that feels unnatural. The Handmaid’s Tale accomplishes both through the amazing talent of Elisabeth Moss.

A generous amount of close-ups on Offred, so close that Moss said she “would have hit the camera” if she moved her head, give us an intimate look into her life. Moss, with passing expressions, subtle restraint, and body language shows us a woman who has not lost hope, humor, or strength despite losing her family, name, and control over her body. As narrator, she curses, jokes, and reminisces, and through her encounters with other Handmaids, we see she’s not the only one who’s still holding on.

Executive producer Bruce Miller has said that while it’s “unquestionably a dark world … it’s not a dark show. The show is about perspective and not losing the hope of getting your life back.” The show, even when it dives into the darkest moments, maintains and declares this spirit from the first episode. 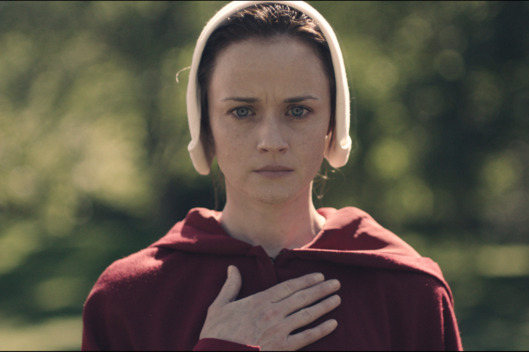 Flashbacks inserted throughout the episodes allow this story to unfold in a way that feels organic, allowing us to connect the dots between the current events and the past—a state of emergency that looks very much like our present. Each flashback makes sense within Offred’s narrative and makes for some striking contrast. As I watched, I was reminded of Atwood’s reflection on the novel’s inception where she said,

“Change could also be as fast as lightning. ‘It can’t happen here’ could not be depended on: Anything could happen anywhere, given the circumstances.”

The most powerful moments in The Handmaid’s Tale, for me, were scenes in Gilead that resemble our own reality. The joy of looking upon your newborn daughter’s face, sharing a joke, or even talking trash show these aren’t characters raised in a dystopia—they’re people like us who found themselves in a dystopia. These scenes work amazingly because they’re almost always followed by a reminder that Gilead is a dangerous and violent place, and the effect is jarring. “This will become ordinary,” says the “Aunt” as she’s training the Handmaids. How ordinary has the horror of our moment become? How much more will become ordinary?

Just as familiar as the moments of joy is the hateful rhetoric of Gilead, with the words like “slut” being thrown around not just by indoctrination, but by “regular” people who suddenly feel more comfortable using that word and the Handmaids themselves. The Handmaid’s Tale is a heavy-handed story, but if you think that a circle of women pointing at a victim and saying “her fault” is a bit too on-the-nose, it might do to remember that we’re not exactly in the most subtle world either. 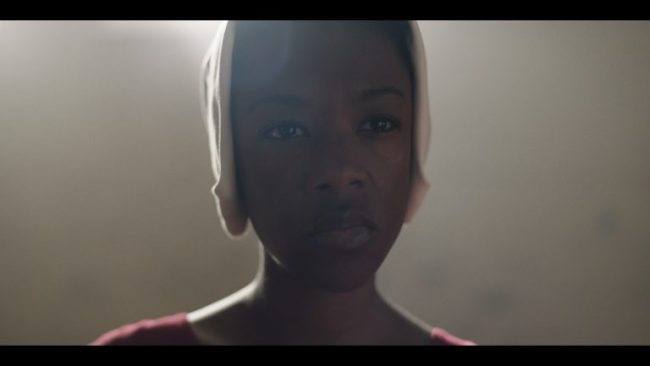 The first three episodes The Handmaid’s Tale were directed by Reed Morano, the director of Meadowland and DP for films like Kill Your Darlings. Morano was also a cinematographer on Beyonce’s “Lemonade,” so there’s no surprise that her collaboration with The Fall‘s DP Colin Watkinson makes for some very masterful shots that effortlessly communicate suspense, claustrophobia, and menace.

Morano, in an interview with Indiewire, talks about “very strict composed frames that are sort of unnerving” for the world, and the flashbacks that serve as “a breather with some more impressionistic camera that feels verité, feels loose.” Shifting between these moments prevented the tone from becoming too oppressive, which I really appreciated in the pacing.

The music choice is phenomenal as well, with one of the most memorable scenes so far taking place to Simple Minds – Don’t You (Forget About Me). The show also makes great use of colors, with the Handmaid red and Wives’ blue popping as if in a painting.

A heads up: The series doesn’t stray away from explicit violence, showing us how Handmaids are treated like livestock for breeding and how “gender traitors” (LBGTQ+) and other groups are killed and displayed as spectacle. Some viewers might want to be aware of that going in, and there are many difficult-to-watch moments.

The performances in these episodes are excellent, with The Handmaid’s Tale showing us the stories of all kinds of women in Gilead and how they each deal with this regime differently. Serena Joy both hates Offred and is thankful to her, and Yvonne Strahovski portrays this with a terrifying volatility. Samira Wiley as Moira inspires, and we’re as eager to see her again as Offred. Alexis Bledel as Ofglen is, so far, my favorite performance on the show.

The show has received Atwood’s seal of approval, with the writer saying she was a “puddle of goo on the floor [by the] end of Episode 3.” Not spoiling anything, but the show extends the plotline of one character, and I share Atwood’s experience of turning into an emotional puddle of goo.