The Handmaid's Tale Invades SXSW and Reddit | The Mary Sue

The Handmaid’s Tale Invades SXSW, and Margaret Atwood Reflects on Its Meaning Under Trump 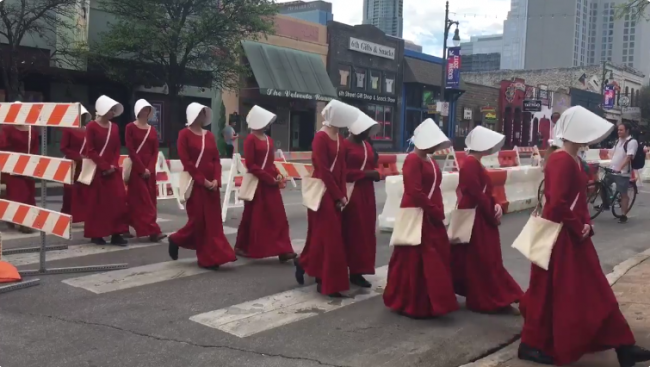 Ahead of the TV adaptation’s premiere on April 26, Margaret Atwood’s The Handmaid’s Tale is stirring up plenty of news. Atwood recently did a Reddit AMA and wrote a New York Times reflection on the novel, while SXSW attendees report that dozens of handmaids are wandering around Austin as part of a creepy promotion for the Hulu TV show.

.@Hulu is doing a great job creeping everyone out at #sxsw with all these handmaids walking around in complete silence. pic.twitter.com/fGxKaPJyz2

In a Reddit AMA, Atwood had high praise for the first three episodes of the TV adaptation, the only ones she’s seen so far. “Based on what I’ve seen it’s a 10. My criteria: puddle of goo on the floor [by the] end of Episode 3. Gasp. Shriek. It goes farther than I did in the book…” Personally, this has me even more excited for the premiere.

Atwood herself will have a cameo in the show, as she revealed in a piece for The New York Times. In that same piece, she also reflected on all the historical events she drew inspiration from, her mindset when writing the book, and the way Offred’s narration work as a “literature of witness.”

“Having been born in 1939 and come to consciousness during World War II, I knew that established orders could vanish overnight,” wrote Atwood, reflecting on the novel’s inception. “Change could also be as fast as lightning. ‘It can’t happen here’ could not be depended on: Anything could happen anywhere, given the circumstances.”

Atwood structured her Times reflection around three questions: Is The Handmaid’s Tale feminist? Is it anti-religious? And is the book a prediction?

Regarding the novel’s treatment of religion, she wrote, “The regime uses biblical symbols, as any authoritarian regime taking over America doubtless would: They wouldn’t be Communists or Muslims…Many [totalitarianisms] have ruled behind a religious front. It makes the creation of heretics that much easier…So the book is not ‘antireligion.’ It is against the use of religion as a front for tyranny; which is a different thing altogether.”

Lastly, on the topic of prediction, she wrote, “No, it isn’t a prediction, because predicting the future isn’t really possible: There are too many variables and unforeseen possibilities. Let’s say it’s an antiprediction: If this future can be described in detail, maybe it won’t happen. But such wishful thinking cannot be depended on either.”

The AMA touched on some similar themes to the Times piece, but it also included an unexpected gem about medium. Discussing the difference between a novel and a TV show, Atwood began with the expected answers about serialization and a visual versus verbal medium, and then added, “Note: novels can do smells. Harder in TV and film: you can have people say Pee-yew etc but you don’t actually get a description of the smell in detail.” What a funny, lovely way to think about it!

In her AMA, Atwood also compared the atmosphere around the 1990 film adaptation to today’s reaction. Back in 1990, she shared, “many people were saying ‘It can’t happen here.’ Now, not so much…”

(Via io9, The Verge, and The New York Times; image via screengrab from Erica Grossman’s Twitter video)