Apparently Nobody Likes To Give Birth On Halloween

Hey, Halloween can’t have everything. It’s already got the best of both holiday worlds: ultimately based on the rich firmament og an ancient religious tradition but also so divorced from its original context that almost everybody can participate comfortably. Also there’s costumes and candy.

So if American women appear to resist giving birth on Halloween to the extent of causing a drop in births of more than 5% between October 29th and 30th that holds true for the last eleven years, well, we’re sure Halloween can cope.

These are results found by researchers at Yale, who noted that “cultural representations, in the form of stereotypes, can influence functional health” and decided to see if there were any correlations between daily birth rates and yearly holidays, using a sample size of all birth certificate data from every United States birth within a week on either side of several holidays, including Halloween and Valentine’s Day.

For Halloween, which “convey’s negative symbolism,” they found that “there was a 5.3% decrease in spontaneous births and a 16.9% decrease in cesarean births. These effects reached significance at p < .0001, after adjusting for year and day of the week,” from a sample size of more than 1,800,000. 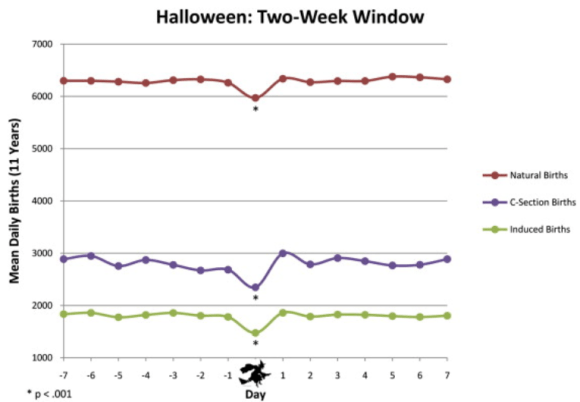 Whether or not Halloween convey’s negative symbolism to you personally, it’s hard not to see the correlation, and possible causation here. Of course, the real question is how is this happening, especially considering the effect occurs in natural births as well. Naturally, nobody has any particularly good explanations.

Anybody out there with a Halloween birthday? How did the combination go for you? Did you mind throwing costume parties every year?

(Graphs via I Heart Chaos.)