Oh, You Hid Some Easter Eggs? Did You Hide Them in Space? Chris Hadfield Sure Did 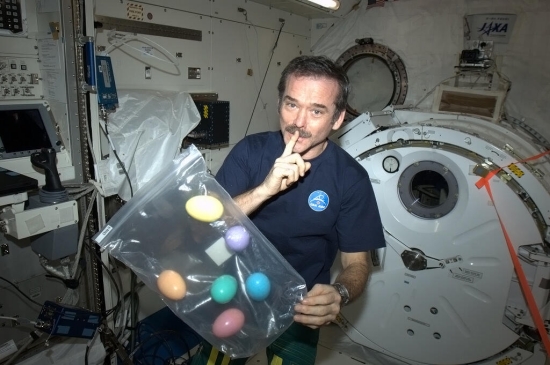 It’s Easter Sunday here on Earth, but International Space Station Commander Chris Hadfield wanted to bring the celebration to his crew, so he hid some Easter eggs on the ISS. I don’t know why we even bother doing stuff that’s not in space anymore.

Hadfield told the world about his secret egg stash through his Twitter account, and again — if you’re not following Hadfield on Twitter you should be. Even if you don’t have an Twitter account. Sign up. It’s worth it to keep tabs on what he’s up to while he’s orbiting the planet, singing songs, and chatting with Shatner.

Don’t tell my crew, but I brought them Easter Eggs :) twitter.com/Cmdr_Hadfield/…

Chris Hadfield has made being in space seem like so much fun I’m starting to question my decision to give up on my eight-year-old self’s dream of being an astronaut. Today I’ll be helping my nephews find eggs — in their yard — on Earth — with gravity. Yuck.

Someone recently accused me of having a man crush on Commander Hadfield. Guilty as charged. I’m really only writing about him so much so when he gets back to Earth he’ll want to be my best friend. Then we can hang out and go on adventures together. Maybe we’ll star in a buddy cop show where we solve space mysteries.