Warner Bros. Is Making A Guinness Book Of World Records Movie That Probably Won’t Break Any Records At The Box Office 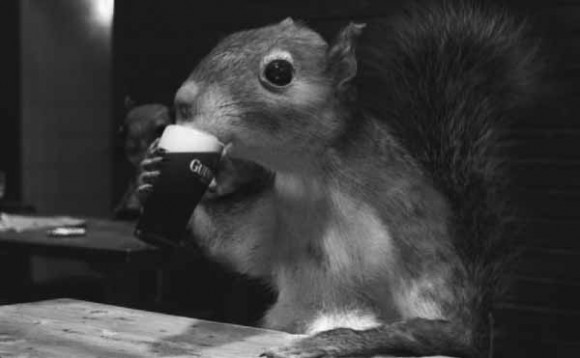 I’m…not sure what to say about this decision so here’s a squirrel drinking a Guinness. But seriously. There’s going to be a Guinness Book of World Records movie.

The Guinness Book of World Records, now referred to as the Guinness World Records, began in 1951 when Sir Hugh Beaver got into an argument over which was the fastest game bird in Europe. Beaver, who was busy making delicious beer at the time, figured it might be useful to have a book of records for reference sake. Especially since people are always debating ridiculous things in bars. Twin brothers Norris and Ross McWhirter, who worked at a fact-finding agency, were commissioned and in 1954 the first book was published.

It’s a pretty interesting story, and could probably be fluffed up even more to make for a dramatic, based-on-true-events, film but that’s not what Warner Bros. has planned. They want to make the Guinness World Records into an action-adventure film.

“The film has been set up at WB-based Thunder Road, and the studio has hired Danny Chun (The Office) to write the script. Thunder Road’s Basil Iwanyk will produce with Motion Theory’s Sean Sorensen and Mathew Cullen,” according to Deadline. “The goal is to blow out the accomplishments of record-setters and turn it into an action movie with global appeal.”

Not completely related but enough to make me think of our recent post, 6 Movies Hollywood Should Be Making Instead of Candy Land. I mean, really, Hollywood.