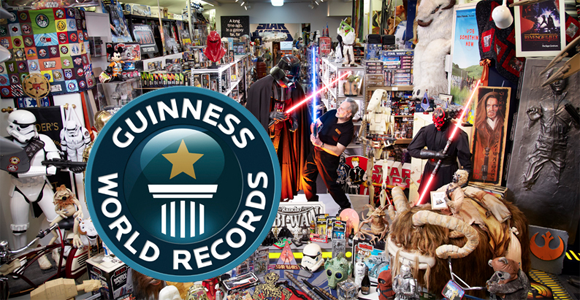 If you’re a big Star Wars fan and you’ve never heard of Rancho Obi-Wan, it may be time to take a trip. While I knew the collection of memorabilia there was vast, the Guinness World Records has now made it official.

Steve Sansweet’s collection resides at Rancho Obi-Wan, a non-profit museum exhibit in California. He and his team had been working for seven years on the inventory and still only had about a third of his collection catalogued. But Guiness assessed the collection and figures he’s amassed more than 300,000 unique items since he started collecting, which was before the first movie even premiered. And with that, they felt confident enough to name it the “Largest Collection of Star Wars Memorabilia” in their 2014 edition.

From the Rancho Obi-Wan site:

“I’m delighted with the recognition from GUINNESS WORLD RECORDS, which for years has been the authority in these matters,” Steve said. “We were really excited to work with the Guinness folks. Preparing the photo shoot set a record in my book for one of the most fun-filled days ever at the museum,” Steve added. “We were especially happy to have Craig Glenday, editor-in-chief of GUINNESS WORLD RECORDS in the U.K. and a huge Star Wars fan, with us to personally oversee the shoot. We kept adding so many great items that we don’t even know how many individual ones can be counted in the photo!”

And if you want just a small look at the immense collection, watch this video Guinness put together.