Doing It Wrong: Guineafowl Imported To Kill Ticks In Turkey May Spread Them Instead 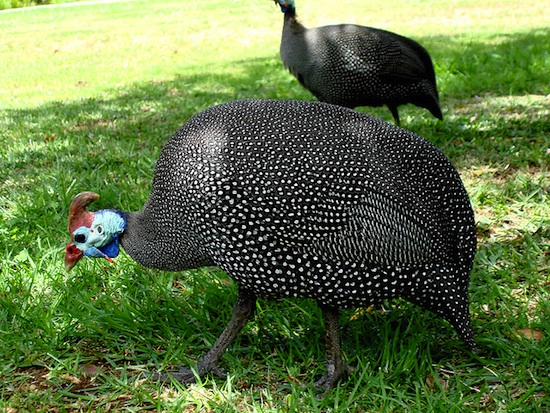 Importing a non-native species to help keep an undesired animal in check is…well, let’s just say that calling it an inexact science is pretty generous. For the latest proof of this, one need look no further than the case of guineafowl in Turkey. The birds, which are native to Africa and about as big as a large chicken or small turkey, were brought to Turkey to stem the spread of ticks that can be carriers of Congo-Crimean hemmhoragic fever. One researcher, though, is suggesting that rather than eating the ticks as planned, the fowl may be acting as new vectors to help them spread.

Guineafowl have been domesticated throughout the world, but the birds being put to work in Turkey are wild creatures. They’ve been released in the last few years alongside thousands of pheasants and chukars — which are native to the region — because the birds eat ticks, keeping their populations down. It’s part of an effort by the government to help raise awareness and stop the spread of the Congo-Crimean hemmhoragic fever that has made itself at home in the region’s ticks.

Autopsies on the birds, though, have shown that guineafowl tend to be more discerning diners than would be hoped, though. Analyses of the stomach contents of the birds shows that they make meals of ticks pretty rarely. Which makes sense, we guess — after all, if you give us the choice to eat “a tick” or “something else” we’re generally going to go with “something else,” too.

Çağan Şekercioğlu, a native of Turkey and a professor at the University of Utah, thinks the birds could end up doing more harm than good in the spread of fever, hitching rides on guineafowl who see themselves as too high tone to eat a blood-sucking parasite. Citing studies that the ticks are shown to carry ticks by the hundreds in Africa, and also shown not to eat them in Turkey, Şekercioğlu is hoping the government will stop bringing in non-native species to control the pests, pointing out that birds native to the area can accomplish the same thing.

It’s too bad that “Turkish Tick-Eating Jobs For Turkish Birds” doesn’t have much of a ring to it. Then again, maybe that sentence is catchier in Turkish?