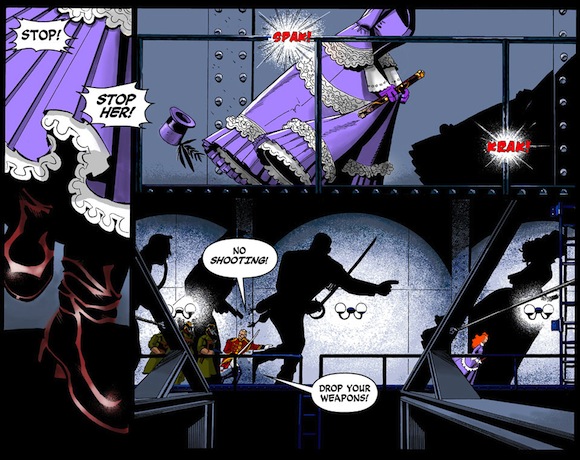 Lady Sabre & The Pirates of the Ineffable Aether launched yesterday, and we were interested in it, because we love Greg Rucka and were deeply saddened and worried when he left DC Comics because he wanted to pursue projects that DC wouldn’t greenlight. But, to our detriment, we were not quite interested enough to post about it until we realized that it’s a webcomic. A free webcomic. And that Greg Rucka, one of our favorite comic writers, has joined the ranks alongside Warren Ellis, another of our favorite comic writers, as creators who have taken their too-offbeat-for-mainstream-comics projects and put them up online, for free.

Why is it super exciting to see people who’ve made their names in mainstream publishing choose internet publishing for their work? Because it further legitimizes one of the distribution methods that may well save the comics industry some day. It also shows that at least a few people from the print publishing side of comics realize that there are a significant number of folks out there who are making a living in comics independently of the Big Two, and they’re doing it because of the internet, even though they “give their work away free.”

But enough of that. Why else is Lady Sabre & The Pirates of the Ineffable Aether exciting?

We could not have put it better. But what else do we know about Lady Sabre?

she… is further rumored to be the author of the scandalous (some have called them “pornographic”) Red Sail series of penny dreadfuls, written under the pen name “Quill.”

Oh, we are so on board for this. Right now there is only one page up, but comic updates are promised on Mondays and Thursdays.