Greenland Surface Ice Melts at Levels Not Seen in 123 Years 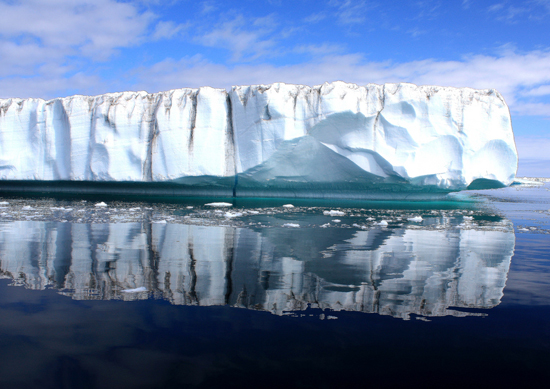 Greenland’s huge sheet of ice always experiences some surface melt during the summer. Not all the way, mind; about 50 percent of the surface sees some melting naturally. This melting refreezes almost immediately or is lost to the ocean and is normal. But NASA’s Jet Propulsion Laboratory has discovered that by July 12th of this year, 97 percent of the ice sheet’s surface had seen some amount of melting. The last time surface melts occurred at similar levels was 1889.

The realization came as JPL’s Son Nghiem was analyzing radar data from the Indian Space Research Organisation’s Oceansat-2 satellite. The magnitude of the result caused him to question whether it was a mistake. It turns out that the data wasn’t lying: Melt maps of the area indicated that around 40% of the surface had melted to some degree on July 8th. When July 12th rolled around, the number had risen to 97%. That’s an increase of 57% over four days or just over 14% a day.

The melting coincided with a heat dome making its home over top of Greenland. From July 8th to July 16th, the strong ridge of warm air mucked about with the temperature and weather of the area. Even this is not unheard of in places like Greenland, but they’ve been seeing a series of progressively stronger heat domes.

Lora Koenig, a glacioligist and member of the team looking into the satellite data from the melt had the following to say, according to NASA:

Ice cores from Summit  show that melting events of this type occur about once every 150 years on average. With the last one happening in 1889, this event is right on time […] But if we continue to observe melting events like this in upcoming years, it will be worrisome.

The impact this level of melting will have on both the volume of ice lost by Greenland this summer and the rise of sea level has yet to be determined. So it might not be the end of the world as we know it, but it also might have consequences we’ve yet to confirm.