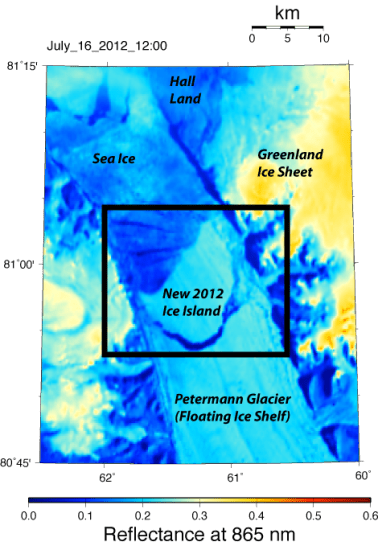 Andreas Muenchow reported the break or “calving” of the ice island in his blog, Icy Seas, yesterday. Trudy Wohleben of the Canadian Ice Service was the first to notice the event which Muenchow describes as “still evolving.” It was first estimated that the ice island had an area of 77.2 square miles (three Manhattans) but this claim was later revised to 46 square miles (two Manhattans).

Yesterday’s calving took place relatively shortly after 2010’s mega-calving, which yielded an ice island spanning a little over 100 square miles. The proximity of the two events is a cause for concern as the glacier’s edge has not been this far back in a century and a half. This indicates that the ice surrounding Greenland is receding at a quickening pace.

Due to climate change, the air around Greenland and Canada has seen a consistant increase in temperature of about 0.11 degrees Celsius over the course of the last 25 years. The calving, however, had little to do with the observable increase in air temperature, says Muenchow. Glaciers are generally affected by ocean temperatures, which have shown no signs of warming.

Yesterday’s calving added 2 more Manhattans-worth of ice to the already densely populated waters around Greenland and Canada. That hour you spend on the subway seems a little more bearable when you know that you could be on the “A” for four times as long if you were commuting on an ice island.