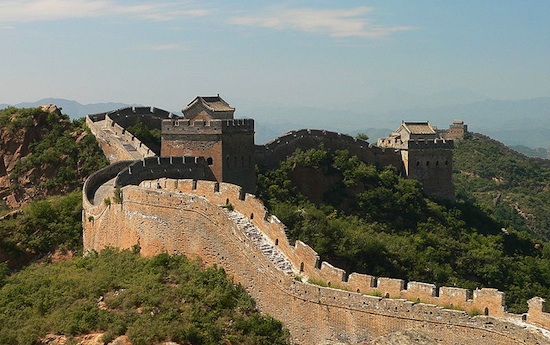 When most of us think of the Great Wall of China, we think of the picture above: A high wall, snaking along mountainous ridges. However, the world’s mightiest border crossing is far more complex. It is, in reality, a hodgepodge of segments, some of which aren’t even “walls,” and some are parallel to each other. A new survey finally takes all of that into account and adds some 8,000 miles to its total length.

According to The BBC, the Chinese news service Xinhua reported yesterday that an effort begun in 2007 to measure the wall’s total length has finished. While conventional estimates put the wall at some 5,500-odd miles long, the final count was staggering: 13,170.6956 miles long, or 21,196.18 kilometers.

The problems with measuring the wall are many and varied. Some sections of the wall are really just earthworks or ditches, and not the spectacularly serpentine blockade we think of. The wall was built over a very long time — some 13 dynasties — and while some sections have been restored, others have languished or disappeared entirely over time.

Adding to these difficulties is that portions of the wall are relatively remote, and that it covers such an enormous distance. After the portion of the wall built during the Ming dynasty was extensively mapped in 2006, the State Administration of Cultural Heritage ordered that each of the 12 provinces the wall passes through begin their own measuring efforts. Along the way, the teams also identified some 43,721 sites for preservation.

Though the total length is staggering, it’s also a sobering reminder that this enormous landmark is degrading. In their coverage, the U.K. Guardian quotes William Lindesay, an expert on The Great Wall, as saying that only 8.2% of the Ming dynasty portions are still intact. Indeed, when it comes to preservation, the wall is its own enemy; its scale daunting those that would save it.

Preservationists now have a powerful tool in this survey, however, now they know what they need to save.

(The Telegraph via io9, image via Wikipedia)