Or maybe we're all falling for an elaborate Banksy prank. 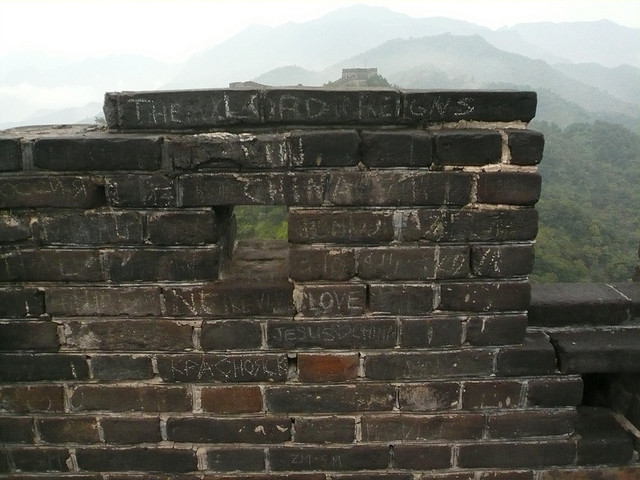 Do you have revolutionary political views (GIVE PEACE A CHANCE) or a budding relationship you want to commemorate for all time? New graffiti sections on the Great Wall of China now allow you to immortalize your genius for as long as the monument may stand. No pressure.

China’s Great Wall has long been plagued by vandalism, and Beijing Evening News reported Friday that the overwhelming percentage of messages are left by English visitors. But, Chinese authorities understand the urge to leave an indelible mark on a piece of history and are sectioning off parts of the wall in Mutianyu near the Number 14 fighting tower for visitors to make their mark.

Proposing “graffiti friendly” sections of the wall, although not particularly rock and roll, is still infinitely cooler and more realistic than the 2006 solution that charged tourists roughly $120 to write their messages on a fake version of the cultural treasure.

China is also reportedly considering touch-screen graffiti areas in the future, although that seems to miss the point. If I’m going to draw a dick or make an embarrassing declaration of love, that shit had better be permanent.

(The Guardian via Gizmodo, image via Cory Doctorow)