I bet the Tunnel of Love and Corndogs is a slow ride, with all those arterial clogs. 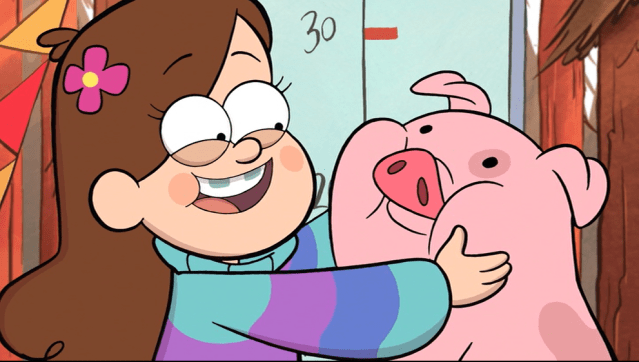 Dipper tries to impress Wendy by winning her a prize at Stan’s dangerously cheap fair but accidentally hits her in the eye with a ricocheting baseball (which also gives sullen fellow teen Robbie a chance to ask her out); meanwhile, Mabel wins a pig that she names Waddles. When the twins cross paths with time traveler Blendin Blandin, Dipper sees an opportunity for a do-over in Blandin’s time machine. But endless tries reveal that the only way for Dipper’s shot to go right is for Mabel to lose Waddles forever.

It’s a common adage that time travel episodes, while appealing, are pretty well impossible to pull off. Few are the “Roswell That Ends Well”s of the world, and particularly in a universe with as dense a mythos as Gravity Falls, there can be a danger of loose threads that never pay off or outright contradict each other. Fortunately, this episode knows all of that and also knows that it isn’t up to taking on the scope of a big, far-reaching event. So, it boils its conflict down to a single moment, the completely relatable do-over that we all wish we could take, and both smartly constrains itself and taps into a perfect heart for the storyline.

I’ve railed a lot on the whole crush subplot, and while it’s still not my favorite here (while it’s arguably down to Dipper’s flawed perspective and the fact that he and Robbie both run off after their respective “losses” rather than actually being frank and talking with Wendy, she’s still pretty much a nonentity in the script), everything around it is a wonderful chance for Dipper to show off his depth as a character. The time travel plot plays perfectly to his anxious, obsessive nature, a match of supernatural-reflecting-interpersonal that characterizes the show’s best episodes, and the fact that Dipper and Mabel are so willing to help each other until it comes down to one or the other losing what’s most important to them both makes their bond something we don’t want to lose and raises what’s at stake here—not just Waddles or Wendy, but a willingness to put someone you love before yourself. (Underemphasized but important is that there’s never a sense that Mabel’s being emotionally manipulative, as Dipper briefly accuses her; she’s given til it hurts with no reservations up until that moment, which is why we can buy into her utter despair over Waddles despite how new the relationship is).

Dipper’s always been protective of his sister, something the writing and animation emphasize in little ways throughout the series (note how he takes her hand during the dart sequence in “Irrational Treasure,” or steps in front of her when they face down the gnome monster in “Tourist Trapped”), and this is a great culmination of that. Dipper’s acted immaturely or selfishly in a way that’s very believable for his age up to now, but this episode makes sure to emphasize that he isn’t just in a hurry to grow up—in some ways he’s mature beyond his years, at least as far as protecting his loved ones.

Speaking of family, while Stan’s in the background of this one, there are some really great little moments showing how much he’s started bonding with the twins. Dipper’s whole “my uncle taught me about this” spiel regarding carnival games might win for my favorite line of the episode, and while “Tourist Trapped” Stan would’ve roped the kids into working the fair, here they’re wandering around and just enjoying the summer while he’s busy swindling suckers from the dunk tank. The little moments of character continuity are worth paying attention to, as they’re usually written that way for a reason and will only continue to get better from here. 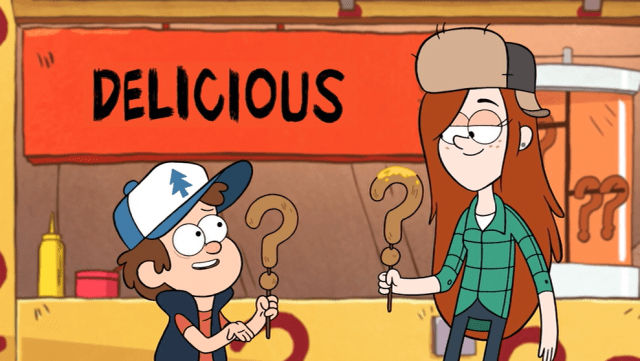 Savvy listeners will recognize Justin Roiland, creator of Rick and Morty, as the voice of Blendin—and that the voice itself is a proto-version of Morty’s (R&M would premiere about 15 months after this episode originally aired). Justin and Alex are quite good friends, y’see, on account of having worked together at Disney some years before. We’re going to end up coming back to this topic in detail in the second season, but for now just keep in mind that the two shows have an unofficially linked history simply because their respective creators liked collaborating so much.

In other news, there was endless speculation around this episode. Jason Ritter, voice of Dipper, mentioned in passing that he’d been told by Hirsch that there was a “secret” hidden somewhere in this episode, and though he’d looked and looked, he couldn’t find it himself. The fandom absolutely tore itself and the episode apart analyzing this one for what the great clue could be, comparable to when JK Rowling announced that Chamber of Secrets held a clue about Deathly Hallows. 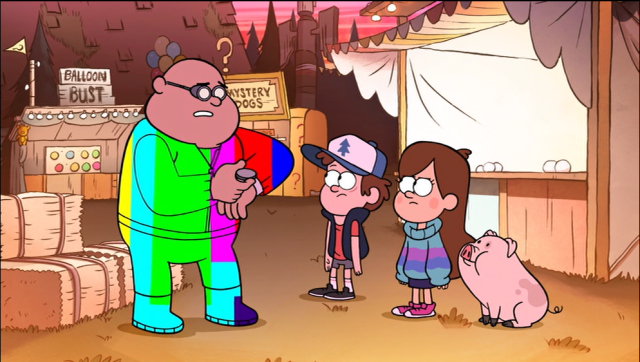 Nothing heralds a sweep of secrets quite like an appearance by Blendin Blandin! As rewatchers up to now have pointed out, this character has in fact been with us since the beginning—every scene that gets “revisited” during the time-hopping sequence features Blendin in the background the first time around as well (arguably this reveal is what taught a lot of viewers to pay such close attention to background details in the first place, as they all rushed to check their screenshots and confirm that, yes, he’s been there all along).

Additionally, it’s always a good idea to check Blendin’s suit. In this case, the locations that flash by while he’s trying to find camouflage are locations for three future episodes (well, one of them is Scuttlebutt Island, which does also return in the between-season shorts). 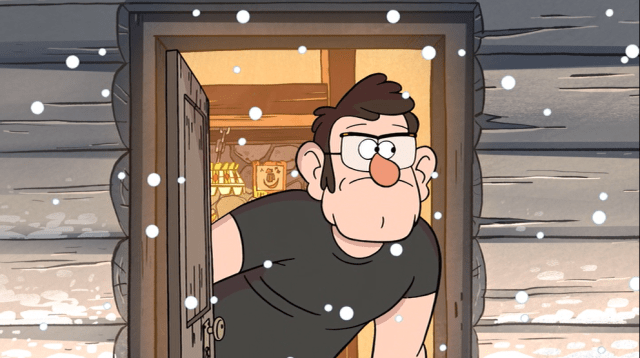 Well, that design certainly changed over time, didn’t it? It’s hard to guess the exact timeframe on that scene (and like the design, it probably evolved as the show went on)—given that it’s winter but the house is still intact … maybe a year before the portal got up and running? Or perhaps just after the accident? That would’ve given him time to both write and hide Journal 3, though on the other hand, he looks quite a bit better adjusted in those few seconds than the exhausted Ford who was hearing voices right after the portal shut down. Heck, maybe he and Fiddleford were inside enjoying cocoa and discussion. There’ve certainly been enough fan comics to that effect.

And given that this is technically Ford’s first appearance, it’s no surprise that this episode parallels so strongly with “A Tale of Two Stans,” with two inseparable twins put at odds by a potential future…and Blendin, since I’m entirely on the bandwagon that Bill-possessing-Blendin was the one who actually broke Ford’s project. The ways in which Dipper and Mabel are basically a “perfect run” mirror of the broken relationship between the original Pines twins is one of my favorite recurrent themes of the series, and at this point really the icing on top of an already great episode.

Vrai is a queer author and pop culture blogger; they’re busy delighting in the Bride of Re-Animator rerelease, check back next week. You can read more essays and find out about their fiction at Fashionable Tinfoil Accessories, support their work via Patreon or PayPal, or remind them of the existence of Tweets.