Gravity Falls Rewatch: The Legend of the Gobblewonker | The Mary Sue

Gravity Falls Rewatch Recap: “The Legend of the Gobblewonker”

Soosfoot is the gentlest of giants. 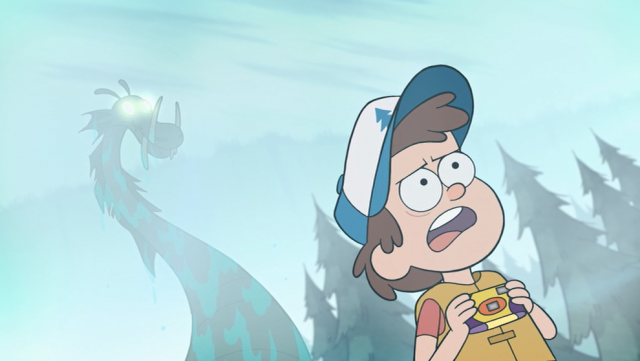 Stan takes the kids out to the lake for a day of fishing, but Dipper and Mabel are far more interested in hunting the supposed monster in the water (and getting a picture that will win them a big cash prize from Dipper’s Weekly World News-style tabloid).

This is a weird one in hindsight. After a pilot that’s actually pretty on-point with what the series became—interesting misdirects with the monsters, a lot of character quirk-based humor, a very tight focus on the family—this episode takes the opportunity to go broader. That’s true both literally, in that this is a chance to introduce snapshots of the townspeople with some really fine attention to detail (Manly Dan’s boat appears to be hand-carved); and figuratively, in the notably different style of joke writing. There are a lot of sight gags and non-sequiturs (I cannot imagine that pane of glass gag being in a later episode), and the script takes a stab at using Dipper as a mouthpiece for some meta-humor about horror and monster hunting. These elements don’t go away, but they fade over time into a patchwork that always tries to contextualize them within the characters’ dilemmas.

There’s an uncanniness to it that’s quite-nearly but not yet at the style that the writing team would gel into, and I suspect the difference is that this episode features a lot of “this is a funny joke” rather than “this is a Gravity Falls joke” moments. That, and that while the pilot was written solely by Hirsch, here he shares a credit with Michael Rianda. There’s bound to be some choppiness in working out a tone, even in a show that had as much creator oversight as Hirsch purportedly put in—to the point where the process was so punishing he apparently considered not coming back for a second season at all. But even with all that, you can see traces of gold—no coincidence that one of the episode’s best jokes, the counterfeiting cutaway, is also quite telling as a character moment for Stan.

A few more outlier things just to mention: Dipper’s Cool Masculine Indiana Jones look still being pretty short, when growing up and looking grown up (i.e. taller) will frequently play into his character; the joke about Stan’s cataracts—he’s always got a bit of a slobby, “letting yourself go” sort of vibe, but he also evolves into a bit of an action hero when the time calls for it; the Journal makes almost no appearance, though Dipper relying on it heavily is a major part of season one; and the actors, particularly Jason Ritter as Dipper, still feeling out the characters’ voices. Though one thing that is the exact perfect shade of weird is those two bodacious 80s babes in Mabel’s fantasy. Those are Craz and Xyler. They recur.

Joke weirdness aside, this episode is quite good at using its fairly generic setup to explore the series’ favorite recurring topic: jokes that become sucker punches once you have context. A lot of that goes down there in Spoiler Corner, but McGucket’s story illustrates it well enough. His character is one giant riff on Comedic Hillbilly Shenanigans, the reveal of the mechanical monster straight out of an episode of Scooby Doo (I would actually lay down money that that’s how the configuration of Old Man McGucket came about). But his sadness is genuine, and not just in the context of the kids and Stan. He’s allowed to be a real, sympathetic character in that moment, and the narrative has affection for him. These moments of humanizing supposed monsters, even if it doesn’t ultimately side with them (though in this case we’ll be returning to McGucket’s story later) is part of what makes the show memorable.

That theme of “family” is back again, all over this episode. McGucket’s broken relationship with his son, Dipper and Mabel leaving Stan, and all the configurations of family (well, traditional family. We’re early yet) Stan bothers throughout the day. And I love that montage. It’s just the right amount of heartfelt payoff and earned cheese, while also rounding back around to the failed “bonding” activity from the episode’s beginning. A cutaway joke with narrative payoff? Who’d have thunk it. 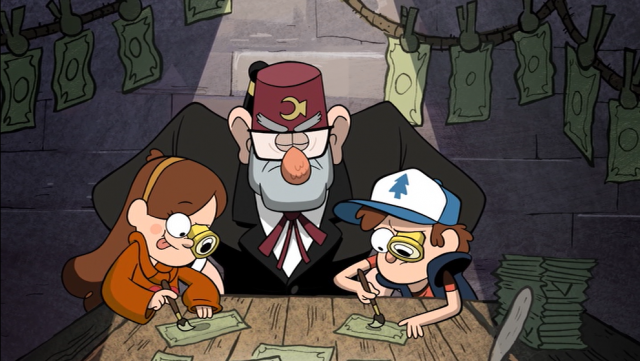 But wait! What about the monster there at the credits? We’re going to come back to the mystery of the ACTUAL Gobblewonker at some point, aren’t we?

Nope. And it’ll save you a lot of heartache to impart this fact to you now: by Hirsch’s own admission, there are mysteries in this show that will never be solved, and he likes it that way. And I have to admit, I respect that. As much as the closing of the gap between creator and audience via social media has contributed to this hunger to have the Official Stamp of Approval (which one can then, let’s be honest, wave in the face of other fans in arguments from atop Mount Ego), having all the answers can do more harm than good in the long run. It’s part of the reasonHarry Potter’s epilogue left so many unsatisfied—it’s always better in your head, and it’s a true mark of love when fans want to puzzle out the “What ifs” themselves (that, and a story is a closed world to an extent—once you move into larger factors like everyone marrying someone who was also a major character, getting their exact dream job, having 3.5 children and still knowing everyone they went to school with, you start stretching credibility a touch). Not every theory will be canon, or come up at all, but that shouldn’t stop you from thinking about them anyway (we’ll come back to the idea of “story” versus “conspiracy” math another week, when there are a few more puzzle pieces we can discuss).

Of course, the chief unsolved mystery is where on earth Soos got his own boat.

Like a lot of these early ciphers, this one’s a simple joke.

NEXT WEEK: RETURN TO BUTT ISLAND.

Don’t let the lake entirely out of your mind, though. We’ll be stopping over there between seasons, for one of the shorts released during the long drought of the Great Season Hiatus. But yeah, there’s no denying that this section is gonna be short for a while.

But! In foreshadowing news, you can see an ad for a “child psychic” on the back page of Dipper’s magazine. Look forward to that sooner rather than later. 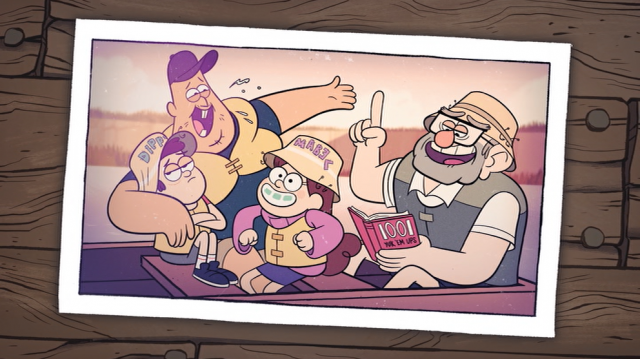 In addition to being a pretty major object in Stan’s backstory, they work pretty well as a metaphor for how this show tackles family relationships (blood and, eventually, found). They come in all shapes and sizes, but regardless of that we all need them to huddle together from the pitch-black uncertainties and unseen dangers in life. And while they can look rough around the edges to the naked eye, that doesn’t necessarily mean they’re not solid. By the same token, something can look fine on the surface and be dangerously damaged underneath, eventually bringing the whole thing down and drowning the occupants.

On the subject of foreshadowing, it’s notable that counterfeiting is an especially apropos skill for Stan to be utilizing at this stage in his life: the creation of a fake that is nearly indistinguishable from the main thing. This is also our first look at the STNLYMBLE license plate on Stan’s car.

As for things that are still up in the air? McGucket, generally. The part about his wife leaving him checks out—presumably that happened after the business with the portal, and she wound up going back to California. Or maybe she stayed anyway, since Tate is still living and working in Gravity Falls? Did he return to try and repair his relationship with his dad, only to give up? This might fall under the “unanswered questions” business, but I’d bet we’ll get at least a touch of insight once Journal 3 is out. What REALLY doesn’t fit the timeline is the “retirement party.” Is that him misremembering his time with the Blind Eye, and actually the incident wherein he separated from them, or perhaps even tried to undo what he’d started? I confess, I’ve got no answers on this one. Emotional pain though, that I’ve got plenty of. That, and a suspicion that McGucket’s apparently spot-on recreation of the lake monster might mean he was actually on that adventure with the Author (who we know wrote about the secret cave, at the very least) and is drawing from those repressed memories to an extent.

Vrai is a queer author and pop culture blogger; they’re busy penning an elaborate love letter to Lord Dominator this week. You can read more essays and find out about their fiction at Fashionable Tinfoil Accessories, support their work via Patreon or PayPal, or remind them of the existence of Tweets.