The dance floor is a minefield. 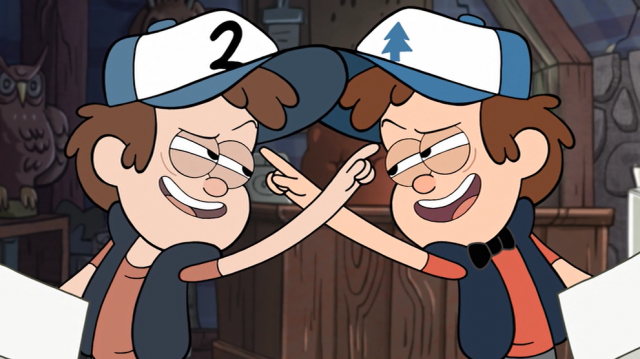 Stan decides to host a party to scam local kids out of their money; while Mabel is hoping to make new friends out on the dance floor, Dipper is pretty sure this is finally his chance to spend some time alone with Wendy. When his uber-detailed plan starts to go awry, Dipper makes himself some backup using the life-giving copier in Stan’s office.

Here’s something of an oddity, readers: while the script for this episode was hammered out by three writers we’ve seen before (Rianda, McKeon, and Hirsch), the story concept actually came from one-time contributor Mitch Larson. This, I suspect, is why we have the inclusion of the fairly generic concept of A Dance into the weird getaway of Gravity Falls, a setup that winds up feeling a little odd in retrospect. Parties, you see, are major bookends of the second season, serving to mark two pretty world changing events. They’re celebrations on multiple levels, with a sense of thematic scope that this episode just can’t measure up to (besides, I suppose, introducing three new recurring cast members).

And, of course, there’s the fact that even at this point in the series, it’s quite clear that Grunkle Stan has secrets he guards quite closely … so maybe letting a bunch of strangers inside the house proper is a little bit of a risk. But those are nitpicks and thematic hiccups, the kind of thing that are pretty well inevitable when looking at an evolving series in retrospect. Really, it’s just my way of trying to avoid the fact that this is another crush episode, meaning we’re well into the spiral where a few weeks from now I will hate absolutely everything (“Fight Fighters” being what I’d firmly call the nadir of this arc).

It’s interesting that the best moments to come out of Dipper’s crush are often the ones that have nothing to do with Wendy at all, something which says as much about the writing as it does Dipper himself. On the one hand, it’s true that crushes, particularly at a young age, are selfish affairs. In the proud tradition of Shinji Ikari, Dipper isn’t so much looking at another flawed person whom he wants to become closer to and understand as he’s seeing a Cool Person he admires who can also give him validation regarding his sense of self. Fitting, then, that this is basically a character study about Dipper “getting into his own head”—the downside of the mentality that also helps him solve the Journal’s mysteries. It’s just a shame, as always, that these moments come at the expense of Wendy getting to be, y’know, a character (though props to a clever bit of vocal directing in Dipper’s fantasy sequence, where Linda Cardellini not only plays a much breathier voice but also goes up into anentirely different register, firmly cementing that this meat puppet has nothing in common with the actual human-person Wendy). At least there’s “Boyz Crazy” to look forward to this season.

On a brighter note, the copier offers the chance for some great visuals. Rewatchers should be surprised not a bit to hear that one of the co-directors for this episode was Aaron Springer, future director of “Into the Bunker (aka “exactly how much of The Thing can we homage in this Y7 TV show?”). The strange magic of the copier is almost more unnerving for its bloodlessness, and the uncanny faded coloring of the copy Dippers (not to mention the goo they become) is just right for subtly unsettling the viewers.

Mabel continues to bring all the heart this episode—from bonding with Candy and Grenda, to refusing to sink to Pacifica’s level of catcalling, to being the catalyst for the sight of moneygrubbing Stan putting aside his gains just so he can cheer her on—but next week is at long last the Mabel episode we all deserve. ELECT MABEL. 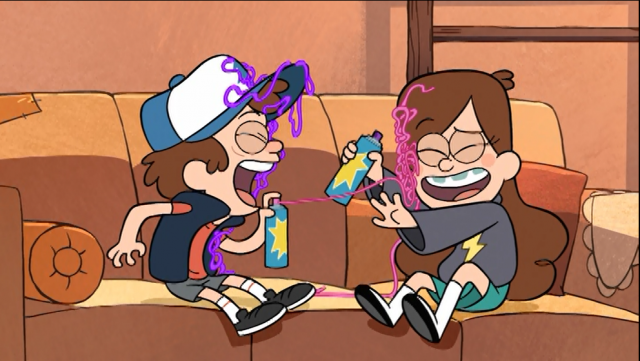 Say, friends, how’ve you been watching this series? iTunes? Amazon? Some other means that I’m certain is Perfectly Legal? Because I can tell you how you’re not watching the show, at least past a certain point: any sort of physical media. Yes, I know that’s going by the wayside and I’m An Old, but I also know that Hirsch really championed a fancy bluray box for the series that would’ve looked like the Journals, had commentary on every episode, and maybe had a fancy extra bit like the monocle or the blacklight.

And that’s the real shame of how the show’s been released: the two DVD releases that did make it to print (containing the first 14 episodes) are completely bare of extra features of any kind, and are released in that special Disney disc formatting that I like to call “didn’t-give-two-fucks grey”). The digital release is likewise pretty barren, and that’s what smacks of a crime to me. This is a series with obscenely dedicated fans and a crew, particularly its creator, who poured thousands of hours and love into the little details and wonderful stories that make up the world of Gravity Falls—that love is part of what people respond to so strongly. Hell, Hirsch once talked about recording a whole season one commentary on its own and offering it for free so that people could synch it with their episodes, Rifftrax style. That’s dedication.

But then, this blasé approach to releases and merchandise is pretty well par for the course. Aside of a smattering of t-shirts, two lines of action figures (one of which, the Vinylmation series, is semi-exclusive to the Disney Parks), and some stuff that was canceled before even making it to widespread production (I still mourn the Journal-shaped wallet, baffling choice though it was), the pickings are well beyond the scope of “slim.”

At least there are the books. But it’s not quite time to talk about those yet. 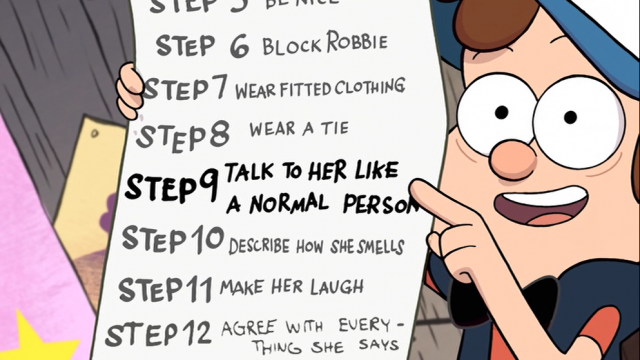 As mentioned last week, this episode sees the switch from the Caesar to the Atbash cipher. And if you hadn’t already figured out how to google that, the opening theme now has an updated clue. The whisper during the last few seconds now says “switch A to Z.”

In other background gags, a really dedicated viewer can freezeframe just about every item on Dipper’s list. But for my money, the absolute best of them all (and a nice addition to the ongoing joke that Dipper has terrible, awful personal hygiene) is this one: 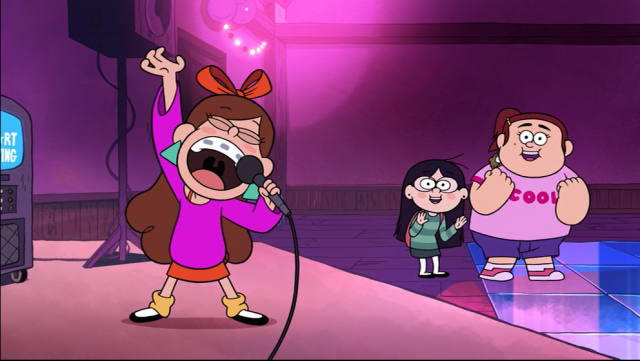 It’s nice to be able to watch this knowing that 3 and 4 are having a nice time out there in the woods, surviving off the land and having an eternal summer of their own. Then I started thinking about it too hard and realized that they’ll probably be crushed by snow come winter, and even if they didn’t are they condemned, like tiny Claudias, to be paper 12 year olds forever, and then I got sad again.

Speaking of sadness, what on earth possessed Stan to fix that copier? One can only presume it was there when he moved in, so he must’ve known it was one of Ford’s Weird Nerd Things (though given the mechanical nature of the thing I would guess Fiddleford was involved in its production). And Stan’s general MO is to wall off Ford’s things because they’re probably dangerous (a la the spare room). So why fix the copier? Well … the answer is probably “like the wax figures, the writers wanted the Shack to be full of strange and mysterious things.” Maybe Stan figured that his nerdy brother couldn’t possibly have ruined something as simple and everyday as a copy machine. Or, most depressing of all, maybe he did know what it was for and was considering trying to copy himself another wax Stan (and figured the kids wouldn’t catch on—he doesn’t know what they’ve been getting into, after all). Certainly the last would make an interesting, painful parallel to Dipper’s story about seeking a facsimile of a real connection because you’ve started to believe it’s all you’ll be able to get.

Vrai is a queer author and pop culture blogger; they’re in nostalgic vampire hell, please send help. You can read more essays and find out about their fiction at Fashionable Tinfoil Accessories, support their work via Patreon or PayPal, or remind them of the existence of Tweets.