Gravity Falls Rewatch: Not What He Seems 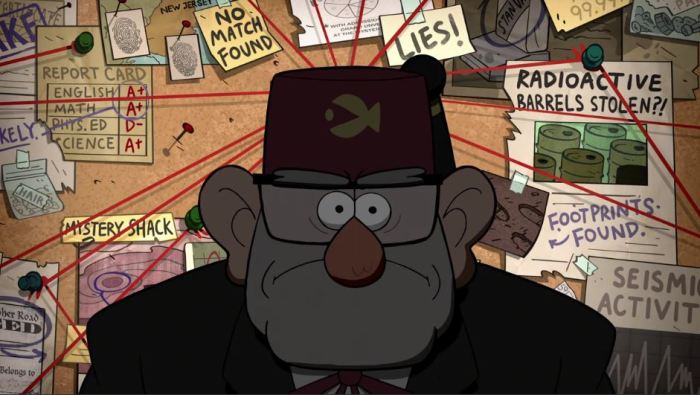 Things come to a head: with 18 hours until the portal is active and open, Stan is arrested by Agents Trigger and Powers for stealing nuclear waste, and the twins realize that their uncle has been keeping secrets about his identity, his knowledge of the Journals, and his stake in the mystery of the Author.

This is arguably the best episode of the entire series. If you take the finale out of consideration, which has the benefit of two episodes plus the entire series of emotional stakes backing up its culminating moments, it’s definitely the best. While a lot of the cryptic moments that come after are no slouch, it’s hard to top the fact that this is the episode to answer the show’s central question: just who is the Author?

And yet, the actual answer to the mystery is saved for the final minute of the episode, which might be the best part of all. Yes, this was a show that was fun to solve in real time, but what makes it enduring even if you go in knowing the big twist (and I imagine most people do, with a year elapsed since the finale and two since this episode aired – yes, really), the character-driven plot keeps you coming back for more than just answers.

It helps as well that this episode goes for broke with its use of ominous (and sunset evocative) reds during its climax, and features two breathtakingly staged and animated set pieces (Stan’s escape and the opening of the portal). They’re not just fluid and beautiful in execution but memorable in design. This is a landmark episode partly because it breaks down the assumptions of safety the viewer’s built up to now, playing on the childhood fear and frustration that adults can’t be trusted, that a home is a safe place, and that certain truths are unshakable: from big shakeups like the literal breaking of the Mystery Shack to the imagery of broken windows and photos, destroying protective barriers all over the place. The Twins have to take a step toward growing up this episode, and it’s not a fun one. 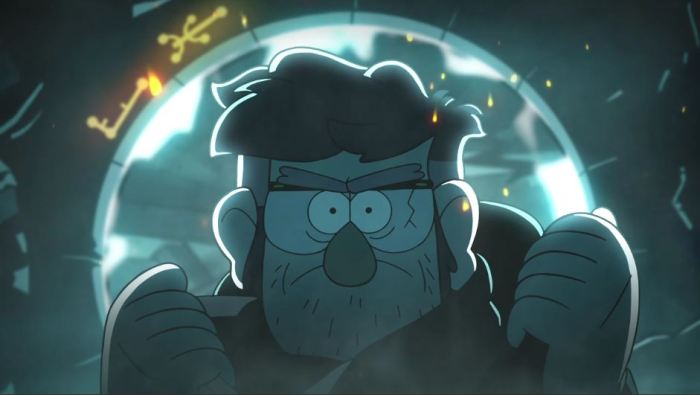 So. The Stan Twin Theory. I’ve been holding onto this one for an age and a half – the oldest fandom theory that turned out to be right. While there was rumbling about Stan having some unheard of sibling as early as “Carpet Diem” (with people retroactively applying meaning to “Headhunters” and then noting the big ol’ giveaway in “Time Traveler’s Pig”), it really cemented itself after the release of “Dreamscaperers.” There’s a lot of thematic stuff in Stan’s head, like the broken swing set, but the concrete detail that set everyone off (in one interview Hirsch compared it to people poring over the Zapruder film, which I find funny because I am terrible), is that you can see the Author in the bleachers with his nose in a book while Stan’s in the boxing ring.

And since there were a solid 364 days between the end of the first season and the premiere of the second, that gave people all kinds of time to form theories about how the Pines twins operated – and it was so prevalent that you basically fell into the McGucket theory or this one. There was the Mystery Trio, a very popular set of headcanons that assumed Stan was in Gravity Falls at the same time as his brother and Fiddleford and took part in their monster hunting; art wondering how far the Author’s connection to the town went back, including the not uncommon theory of “crossing paths with Bill somehow has kids;” and there was the name thing, which messed up many an archiving system when it was revealed that the Author was not, in fact, the one named Stanley.

The lead up to this episode also found a way to make use of those excellent puppets from the “Sock Opera” credits, with short extra videos of Stan answering questions during his arrest. Hirsch would use the McGucket puppet later for some Apocalypse-related extras (and also to answer any spoilery questions during cons). 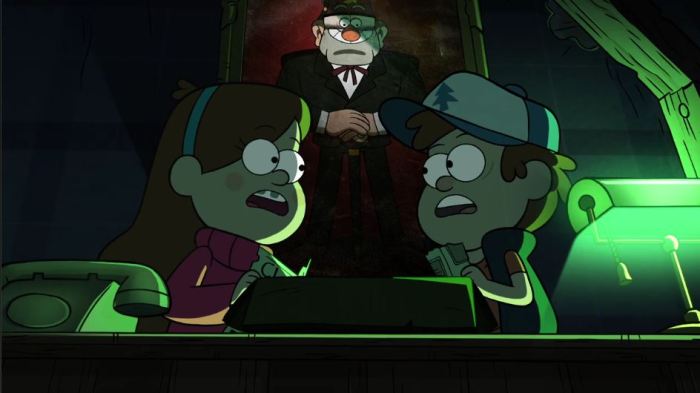 There are a lot of background ciphers in this episode (which fall into the “atmospheric but not especially plot relevant category), as would be expected, but my favorite detail remains the bit of non-coded set dressing while Dipper and Mabel are looking through the security tapes. They say you can tell a lot about a person by what they read, and in his search Dipper pushes aside some books that would provide pretty immediate answers: alongside the books on business and bad jokes, there is a book emblazoned with the title DADDY ISSUES along with Stan’s high school yearbook – the latter of which would even provide the Author’s picture. 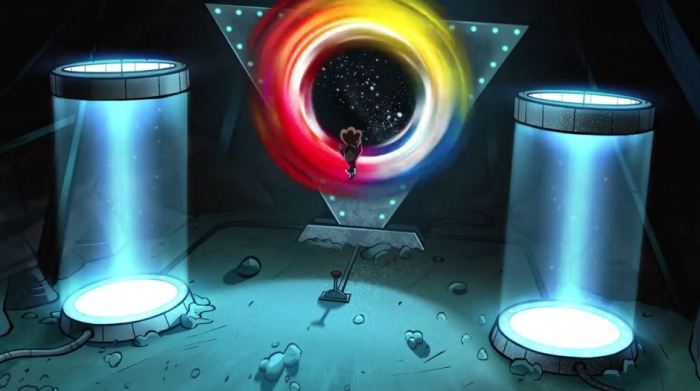 The theme of today’s episode might as well be “how trust issues have been shooting the Pines family in the foot for generations.” While this episode seems to reward Mabel for blind faith on a first watch, in light of the series as a whole she’s the one who’s able to break the cycle of mistrust that led to this situation in the first place. Dipper isn’t wrong to come to the conclusion he does, or to be hurt that the rug was pulled out from under him (although perhaps he could’ve intuited that Stan hadn’t read the warning because he didn’t know about the blacklight trick, and didn’t have access to the actual apocalypse warning on Journal 3). It’s just that following Dipper’s plan would’ve led to a soul-crushingly sad ending, even if he didn’t know it.

The battle between emotion and logic reappears frequently throughout the show (represented by Stan/Mabel and Ford/Dipper respectively), with neither the universally right answer. It’s what makes the theme work rather than feeling glurgy or cold in one direction or the other. Things work their best when the two elements are in concert, with emotional connections tempering the risks of purely intellectual pursuit and vice versa. Ford wound up in the portal because he shut off all of his connections and trusted a monster who seduced his ego. Stan almost ruined his own plan because his pride, among other things (we’ll get back to Stan and toxic masculinity), kept him from being honest with the twins.

Meanwhile, Mabel, a character who’s often been defined by her impulsiveness, took this important moment to consider what she knew, and how things looked, and the gravity of the situation… and still chose trust. It’s the hardest, most dangerous decision in the show, perhaps barring the Memory Gun trick in the finale (and no coincidence that they’re billed as major moments of reversal, with Ford having to put aside his ego and trust his brother’s plan). That scene reveals the show’s thematic cards, and how much the mystery elements are ultimately less important than the exploration of bonds and sacrifice for the sake of family. This show was never more at the top of its game than when exploring the power of platonic relationships.

… and Mabel literally becomes a shooting star, I see what you did there Hirsch.

Vrai Kaiser is a queer author and pop culture blogger; carrying on for spite has proven to be a very viable strategy thus far. You can read more essays and find out about their fiction at Fashionable Tinfoil Accessories, listen to them podcasting on Soundcloud, support their work via Patreon or PayPal, or remind them of the existence of Tweets.