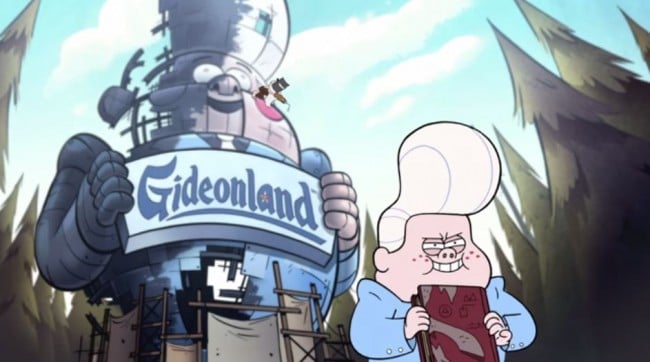 Hey, gang – for those of you that normally skip the spoiler section, be sure to check below that on this one (I’ll give it some space for safety). I’ve gotta talk to y’all.

Things look dire for the Pines family: Gideon is planning to bulldoze the shack to create a theme park dedicated to himself, and with no money or job Stan has no choice but to send the kids back to their parents. Worst of all, Gideon is on the hunt for the other Journals, convinced that bringing them all together will unlock incalculable power.

To this day I remain impressed by just how much this episode manages to pull off. Not only does it have to top “Dreamscaperers,” which added the major game-changer Bill Cipher, with a more technically mundane conflict; it has to raise the stakes of the individual episode, Gideon’s role in the season as a villain, rewrite the Journals’ place in the canon (both distancing Dipper’s reliance on them and elevating their importance to the deeper mythos), and finally play the card it slid onto the table with Stan in that very first episode.

On top of all of that, it also does some fine work in training the viewer for the next season. We’ve talked in the cipher section about how the show has featured a gradation of gradually more difficult codes; here, it does something similar with plotting. The evidence for the reveal about Gideon’s hidden cameras is all planted, Sherlock Holmes style, in plain sight even if attention isn’t called to it.

When Stan explicitly spells out how he put things together at the end, it encourages the viewer to go back and pay attention to the little background facts and seemingly unexplained details. Not only is it a neat trick for younger viewers in particular in learning how to parse visual storytelling, but it also unconsciously preps the audience to look for those kinds of hidden reveals in future episodes. I give a full tip of my hat–it’s not just any show that can both hide all the clues of the central mystery in the background while also slowly training its audience to outsmart it (a technique which eventually meant having to restructure some things in the season 2 writer’s room, since the fanbase cracked one of the major mysteries during the hiatus).

The smartest moment in “Gideon Rises” might be the temporary intrusion of real, adult concerns: Stan’s sorrow that he doesn’t have the means to provide for the children depending on him. It’s a quiet, heartbreaking scene, my personal favorite; and a great precursor to the second season, where the supernatural dangers were somehow less frightening than real fears of growing up and growing apart.

That’s not to say that the bombastic moments–Gideon’s giant mech and the gnome archers and that hilariously deadpan delivery on the Journals’ greater importance–but the grounded moments are what make it all mean something. Stan turning on the portal is an amazing cliffhanger, but what really gives it power is the mundane sight of Dipper and Mabel’s picture on the control panel, and the knowledge that even after Dipper tried to open up they’re all still keeping secrets from each other. 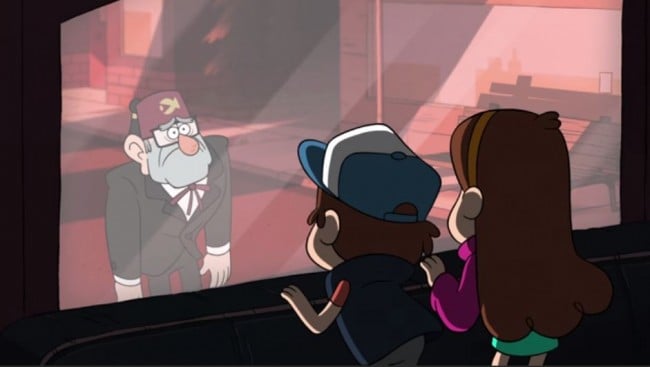 Following that stupendous cliffhanger and ominous pronouncement, the hiatus began. Not just any hiatus, either. While it had taken the first season of Gravity Falls a year to air, it would be another year before season two would even begin. I suspect that yearlong hiatus is at least part of the reason the Gravity Falls fandom turned out the way it did.

Take a show that already encourages the decoding of background details and revolves around a mystery element, add a creator who enjoyed having some fun with audience expectations, pour it over a massive cliffhanger and the introduction of some huge unexplained portions of worldbuilding, then give that a year to simmer.

Not only that, but Disney’s blasé treatment of the show as far as scheduling and merchandise imbued an added sense of necessary protectiveness: “Disney doesn’t appreciate this show; nobody is paying attention to it, but we understand it.” It’s the sort of mentality that I imagine made Twin Peaks such a hit back in the 90s, and to this day I’m not sure if Disney had a happy accident or if their “imagineers” are a great deal more cunning and cutthroat than I’ve ever given them credit for.

A year off also gave fans time to go over images, as Hirsch put it, “like it was the Zapruder film.” This was around the time that a certain very prominent (and eventually correct) conspiracy theory clicked into place and started gaining traction, to the point of being considered offhanded canon long before it was confirmed. All that, of course, alongside countless AUs and ultimately untrue speculations (and a million and one theories about Bill). 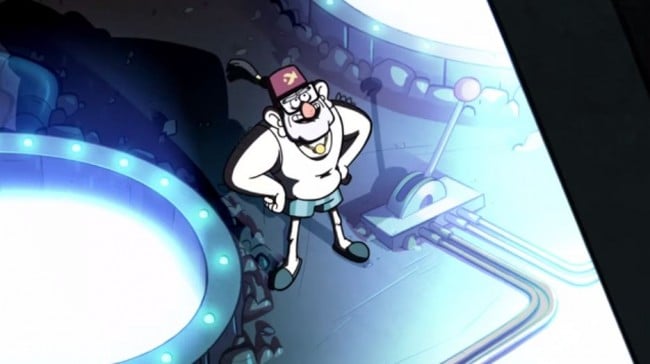 CREDITS CIPHER: “Search for the BlindEye”

This episode is the first instance of a visual trick that the storyboarders will go back to more than once as a means of hiding secret clues or bits of foreshadowing: panning down from the attic through the rest of the house, while also conspicuously showing the layers in between the actual rooms. In this first instance, a pipe is engraved with a cipher reading “BILL IS WATCHING.”

Clear screenshots of the Journals also means an opportunity to hide yet more bits of text. This time, there’s a message from the Author on the blueprint page: “THE PORTAL WHEN COMPLETED WILL OPEN A GATEWAY TO INFINITE NEW WORLDS AND HERALD A NEW ERA IN MANKIND’S UNDERSTANDING OF THE UNIVERSE. PLUS, IT WILL PROBABLY GET GIRLS TO START TALKING TO ME FINALLY.”

Gonna go ahead and put a spoiler warning that that last sentence isn’t true. Unless of course he somehow has supernatural awareness of the fandom’s soon-to-come appreciation, in which case fair dues. 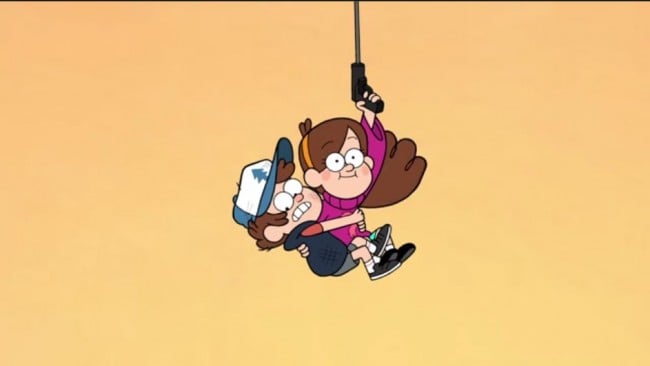 Are you kidding me, sir? You made an entire page titled “possible hiding places” in the depths of your paranoia, right out there in the open, but then put the warnings about how dangerous your doom portal was in code? There’s bad planning, and then there’s that (I also cannot decide whether I prefer the idea that the skulls-and-candles shot of the Author was Gideon’s perception of him, or if Ford really set all that up just to better fit the Cool Lone Hero archetype).

One of the best things about rewatching this episode now that the series is complete is noticing the way the two finales echo one another. In some ways, “Weirdmaggedon” is just a grander, more high stakes version of the plot beats of “Gideon Rises”: the Pines’ home is taken from them by a malevolent force, the inhabitants of the town become obstacles to the kids achieving their goal, a former antagonist becomes a short-term ally that ultimately falls to the main threat, one of the twins has a crisis about how they interact with the world and needs their sibling to pull them out of it, and ultimately it takes a pair of twins to win the day.

None of that is a mark of laziness–it’s actually downright brilliant, reinforcing the themes and ideas that have underpinned the whole series even as a literally cosmic threat removes even the theoretical presence of grounded reality. It’s also a nice way to build on and contrast the relationship between the two sets of Pines twins, but that’s for another day.

Speaking of another day–I have to tell you some sad news, dear readers. This series is going on a hiatus. Yes, I know. The irony isn’t lost on me. We’ll be on break for a few weeks while the Summer of Steven rages on and yours truly clears up some tumultuous Real Life doings. I look forward to seeing y’all in August (and hopefully getting my hands on that Journal 3 replica). Take care out there.

Vrai is a queer author and pop culture blogger; they’re presently feeling Stan’s situation a little too hard. You can read more essays and find out about their fiction at Fashionable Tinfoil Accessories, support their work via Patreon or PayPal, or remind them of the existence of Tweets.