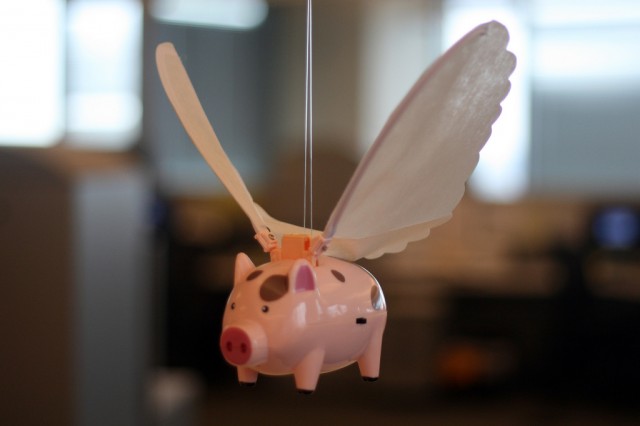 As a not-born-but-bred Washingtonian transplanted to the East Coast, there are plenty of things I miss about home. Considering that things like “common sense drug laws” and “delicious, locally sourced food” both rank very high on that list, the following story pretty much sums up why I love my home state, where rancher and butcher William von Schneidau of BB Ranch is now raising “pot pigs” — swine fed on marijuana plants as a part of their daily diet.

Before you ask, no, eating delicious bacon from a weed-fed pig won’t get you high. Well, no higher than the normal endorphin rush associated with bacon consumption, anyway. That’s not the goal, though — the goal is recycling waste from pot growers in Washington, where recreational marijuana use was decriminalized by a popular vote last year.

Do the pigs get high, though? Well you’d have to ask them, and I don’t like your chances of getting a straight answer out of a stoned swine. The pot the pigs are eating is waste material provided by medicinal marijuana growers co-op Top Shelf Organic, like stems, leaves and bulbs that are left after the easily smokable buds have been harvested and sold to law-abiding citizens throughout the state. And while not all animals are capable of getting high, pigs do have the brain receptors to process THC, and the waste material they’re munching on does contain significant amounts of cannabinoids. The fact that von Schneidau says the four pigs raised on a pot diet gained more weight than their peers may suggest a case of the munchies, though that remains speculation.

According to von Schneidau, though, just because the pigs aren’t discovering a newfound appreciation for Led Zeppelin doesn’t mean they’re not being affected by the grub. The plant waste adds fiber to their diets, and renders the resulting meat nice and savory. Whatever the implications of a high pig are, we’re probably willing to live with them if a more flavorful pork chop could be the result.