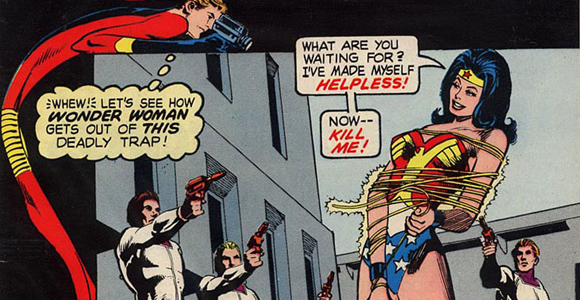 Wonder Woman has been connected to sex and fetishism since she was first introduced by William Moulton Marston in 1941. Many creators have taken on the Amazon since then and have addressed those aspects of her creation to varying degrees. Well after his appearance at the Edinburgh International Book Festival recently, author Grant Morrison let the world know that for his looming Wonder Woman series he won’t be shying away from Wonder Woman’s sexuality and the implications bondage has for the famous character.

Laura Sneddon transcribed Morrison’s entire talk from the festival on her site ComicBookGRRRL. “I’m sweating the minute you said fetish!” Morrison laughed as a member of the audience asked how he’d portray Wonder Woman’s fetishized nature in his work. He explained a bit about the characters origins and how Marston and his wife Elizabeth Marston created Wonder Woman, “because they felt that Superman represented a kind of blood-curdling masculinity as they said, so they wanted to introduce somebody who was a bit more feminine, but now at the same time Marston also had all these amazing kinks, because he had this idea that basically the world would be better if men would just submit to women’s complete instruction.”

Morrison taking on Wonder Woman has been teased for several years now to, I’m sure, both elation and fright depending on fans differing opinions of the famous author, but from what he had to say at the festival, his Wonder Woman story would tackle her intentional origins head on and with respect.

“The [original] Wonder Woman strip had this weird libidinous kind of element and obviously on Paradise Island, it was this amazing Second Wave, separatist, feminist idea of an entire island where women had ruled for 3000 years and what they did for fun was chase one another! So the girls would dress up like stags and run through the forest and another girl would chase them and then they’d capture the girl, tie her up and put her on a table and pretend to eat her at a mock banquet. This is a typical Wonder Woman adventure! [laughs] In 1941,” he said.

Morrison remarked “that energy left the strip” after Marston passed away. “They were really worried about what he was doing, the bondage elements were becoming more and more overt, but the sales were good! [laughs] This was working! Unlike Superman, as you say, I started looking at trying to do a Wonder Woman that brought back some of these elements but without it being prurient or exploitative.”

And that was his starting point. “Superman when he began was, he could throw people out of windows, you used to see him drop kicking guys into the ocean, and obviously that would kill you. You know Batman had a gun and sometimes he would shoot people. But those things weren’t intrinsic to the strips, you know, you could take out those elements, you could take out the murder element of Superman and Batman and the strips still worked. But when you took the sex out of Wonder Woman, the thing went flat,” he told the audience. “So it seemed that there was something about those libidinous elements that were actually fundamental to the concept of Wonder Woman, and trying to find a way to put those back without being William Moulton Marston and not being into what he was into, was quite a difficult thing.”

“I think I’ve found a way to get all that back in again but it took a lot of reading,” he continued, “This has been the hardest project I’ve ever done. I had to read feminist theory all the way through, from Simone De Beauvoir to Andrea Dworkin and apply it to this character. And to try and do something that incorporated those ideas but completely took them in a different direction. So I mean beyond that I’ll say, Wonder Woman needs sex definitely because you know, again as I said in [Supergods], they kind of transformed her into a cross between the Virgin Mary and Mary Tyler Moore. This girl scout who had no sexuality at all and the character’s never quite worked since then. In the way that Superman’s supposed to stand for men but at least he’s allowed to have some kind of element of sexuality, Wonder Woman is expected to stand for women without any element of sexuality, and that seems wrong.”

Morrison always seems to have a lot on his plate (still waiting for that Multiverse project) and with DC’s relaunch this past September and the writer tackling Superman with the new Action Comics title who knows if his Wonder Woman project will see the light of day in 2012 as he says. Not to mention the fact that Brian Azzarello is currently writing the character and having great success in the sales department.

The biggest question about Morrison’s Wonder Woman is how he’ll actually get a title to showcase the character’s sexuality and fetishism without going down the path of straigh titillation or gratuitousness, something that caused a big stir with fans when the first issues of Catwoman and Red Hood and the Outlaws were released. It’s certainly a thin line but even if he does cross over people will buy it, number one, because it’s Morrison, and number two, because that’s exactly what some fans have been wanting to see from a Wonder Woman book. Though Frank Miller and Bill Sienkiewicz‘s Wonder Woman: Bondage project was never going to see the light of day so maybe Morrison really does have a handle on how to balance Wonder Woman’s fetishism and strength as a female.

Also something to ponder? Morrison mentioned Superman being more violent in his past and Batman using guns and that they were still interesting after that was taken away from them yet in Final Crisis he once again put a gun in Batman’s hands (and had him use it) and his take on Superman in Action is far more violent and with less power, much like his original incarnation.

What do you think about Morrison’s outlook on the famous Amazon? Would you buy his Wonder Woman based on what he had to say?