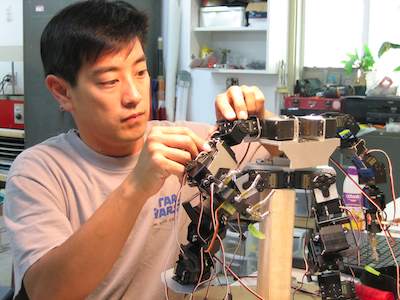 Late night host Craig Ferguson is a huge Mythbusters geek: since he joined Twitter last month, a good number of his tweets have been about how terrific Mythbusters is and how he maybe watches too much of the show. Now, Mythbuster Grant Imahara has thrown down the gauntlet: if he gets 100,000 Twitter followers, he will build Craig Ferguson a robot sidekick.

Ferguson, for his part, has thrown down an even bigger Twitter challenge: when he gets enough Twitter followers, he says he’ll “move them into a hollowed out volcano where they will train alongside [his] robot-skeleton army.”

Late update: Unsurprisingly, the mark has been passed, and Craig Ferguson’s gonna get his robot. Imahara: “Your Tweet-Fu is indeed strong. And your legions are loyal… It begins.” Ferguson: “@grantimahara. Warning! DO NOT put the emoticon chip in the Robot Skeleton.”