Is it September yet? 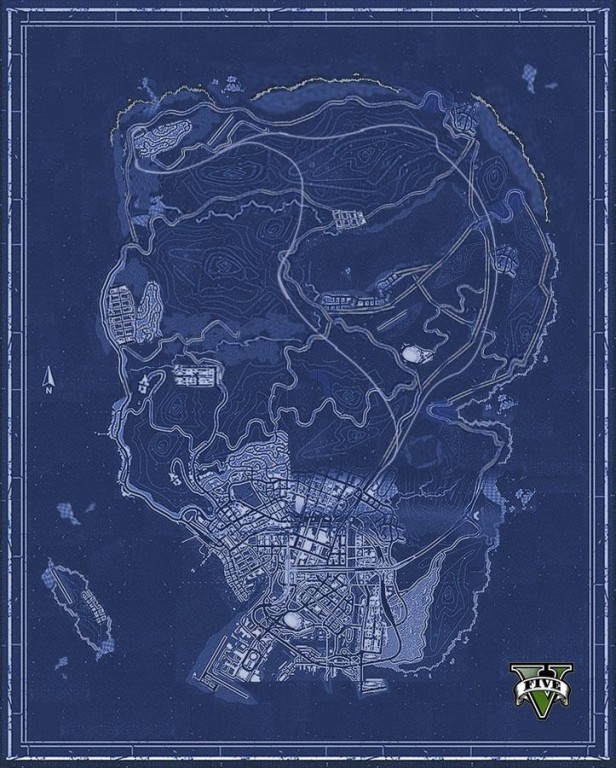 Rockstar has already promised that Grand Theft Auto V will be bigger than Red Dead Redemption, GTA IV, and San Andreas combined, but it’s not just about the size: It’s how they use it, and right now, it looks like players will have plenty of space should they want to get away from the rush of the city. Fans of the upcoming game have constructed a full map of the game’s world well before its September release.

GTA V will return to Los Santos, the Los Angeles-inspired city featured in GTA: San Andreas, though the geography will be completely revised and will not feature the other two cities of Las Venturas and San Fierro from that game. Los Santos seems to have the island to itself, but hopefully the other cities didn’t just fall into the ocean after a bad earthquake. That’d be unfortunate.

Released fragments of the official map have given us a good idea of the urban area of Los Santos, but the scale of the game’s blueprint map points to the city region being dwarfed by the vast wilderness areas of Blaine County, mainly to the north. As depicted on this map, the whole world is contained on a huge island, and if that didn’t give you enough beaches, the Alamo Sea, a massive salt lake based on California’s Salton Sea, is located inland.

Other retreats from the big city include a rural farming community, a desert, mountains, the obligatory military base, motor sports areas, and fully detailed exploration of the ocean floor by SCUBA gear or submarine. And yes, Final Fantasy VII featured all of those fifteen years ago, but Grand Theft Auto V‘s execution will almost certainly be superior, and with no racing of giant birds.

Again, the map is made by fans and based on some speculation and filling in of blanks. Other unofficial maps, including one from Computer and Video Games, have roughly the same shape and positions of significant landmarks, however.