The Senate Is Coming After Your Healthcare Again 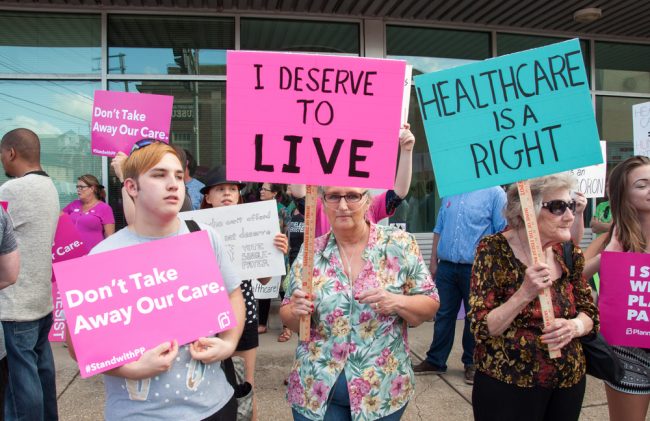 Republicans in Congress can’t stop trying to kill and bankrupt their constituents.

If the Senate wants to pass an Obamacare repeal bill without worrying about a Democrat filibuster, they’ll need to do it before September 30 – and so they’ve introduced their last-ditch effort. It’s just as monstrous as the previous attempts.

Senators Bill Cassidy (R-LA), Lindsey Graham (R-SC), Dean Heller (R-NV), and Ron Johnson (R-WI) have unveiled a new attempt at Obamacare repeal. As Politico summarized, the bill “would provide states with block grants instead of Obamacare’s tax credits, Medicaid expansion and cost-sharing payments. It would also repeal Obamacare’s individual and employer mandates and the medical device tax.” As CNBC summarized, it would “strip away $80 billion in federal funding support for health coverage,” and pending CBO score, is likely to leave around 30 million more Americans uninsured. And as Vox put it, “Cassidy-Graham would arguably be more disruptive, not less, to the current health care system than the plans that came before it.”

Both Vox and The Washington Post have more detailed explainers on how the bill would change existing Obamacare provisions, and Andy Slavitt has a Twitter thread about the estimated consequences for every state. As the Post explains, “the bill would restructure Medicaid and decrease its funding. That would make it very difficult for states to maintain the Medicaid expansion.” Medicaid would be funded by a per capita block grant, and by 2020 the federal government would no longer fund the costs for any state-level expansion of Medicaid. This system would hit those states with expanded Medicaid coverage and a higher cost of living the hardest, because it essentially punishes Medicaid expansion and generous benefits. Of course, the states which take better care of their citizens this way are usually liberal, blue states like California, Massachusetts, and New York – states the Republicans don’t care about.

In addition, Planned Parenthood would be defunded for a year, states could choose which essential health benefits insurers are required to offer, the individual and employer mandates would be gone, insurers would be able to charge older customers five times as much as younger ones (compared to Obamacare’s limit of three times), and while there is a lip-service limit on denying coverage based on preexisting conditions, states would be able to allow insurance companies “to not cover costs associated with some conditions.” This provision would functionally allow discrimination based on a preexisting condition, because insurers could offer plans which don’t cover benefits like maternity care.

The scariest part of this bill? As of yesterday, Senator Cassidy said that “as many as 49 GOP senators have expressed support,” although he “doesn’t have a hard whip count.” The GOP can only afford two defections, thanks to Vice President Mike Pence’s tiebreaker vote.

Senator Rand Paul (R-KY) has already said he will not vote for the bill, for his own oh-so-Rand-Paul reasons, which means both Susan Collins (R-ME) and Lisa Murkowski (R-AK) need to reject this bill to kill it. John McCain (R-AZ) could do the decent thing, but he’s likely to support it since he is such close friends with co-sponsor Graham. Shelley Moore Capito (R-WV) might also do the right thing, given how devastating this bill would be for Medicaid, but she’s been swayed to a “yes” before, even with the health of millions at risk, so I’m not counting on her.

Honestly, at this point, I’m not counting on anyone – except all of you.

Time to call our senators.