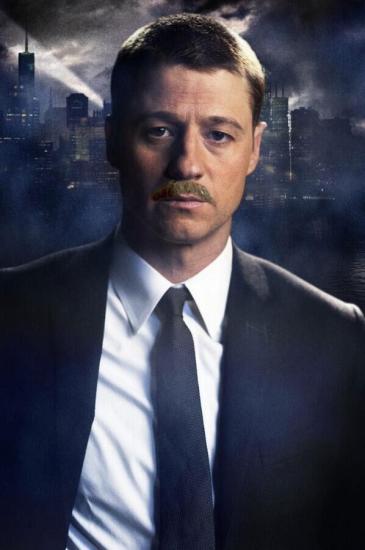 Pictures from Fox’s Gotham production have begun to surface, of a young Catwoman, the Penguin, and Harvey Bullock, and they all look pretty fine. Yes, every thing’s fine. Except James Gordon has neither a mustache nor glasses, and we can’t get over it. In a genre where we far more often distinguish characters by brightly colored costumes rather than by, say, drawing distinct faces, small distinctive features for the characters who don’t wear those costumes become pretty important. You can tell who Green Arrow is, for example, without the Van Dyke, but Commissioner Gordon without glasses and a brushstache is just some guy. It’s not going to stop us from checking out the show, but just take a look at this photoshop MTV’s Alex Zalben mocked up using, I assume, the mustache tool. 100% more Commissioner Gordon-y.

Fine, Gotham, save the mustache for when you have him grow it as a symbol of character development after a season finale.