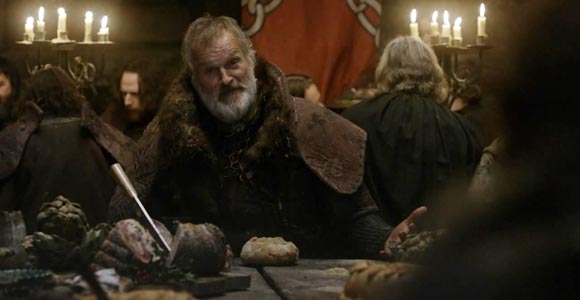 We all knew Greatjon Umber was tough son of a gun but it turns out the actor who plays him on HBO’s Game of Thrones is as well. Clive Mantle was recently in an altercation in which part of his body was bitten off. Now the question is, was it the same part he lost on the show?

Clive Mantle, who was also a longstanding cast member on the BBC medical drama Casualty, was attacked at the Travelodge in Foster Street in Newcastle after a dispute over noise, according to his agent. Following the attack, which happened in the early hours of Sunday morning, Mantle underwent emergency surgery to have his ear sewn back on.

They say the 6’5″ actor asked a group of men outside his hotel room to take their noise down a notch. After asking them nicely to quiet down one time, he threatened to call security the second time he had to speak with them. His agent Bryn Newton told The Mirror, “That’s when they set about him. Even though he is a big guy they got him on the ground. One of them bit the top part of his right ear off. It was savage.”

A 32-year-old man is now charged with wounding with intent while another was released on bail. Luckily surgeons at Newcastle’s Royal Victoria Infirmary were able to sew Mantle’s ear back on.

“He is very shaken and shocked by what has happened. You don’t expect this kind of thing to happen in a hotel,” said the spokesman. “The part of the ear that was bitten off was found and sewn back on. Mr Mantle said the police, ambulance and hospital staff were amazing.”