Everything You Don’t Want (But Definitely Need) to Know About Neil Gorsuch, Trump’s SCOTUS Pick 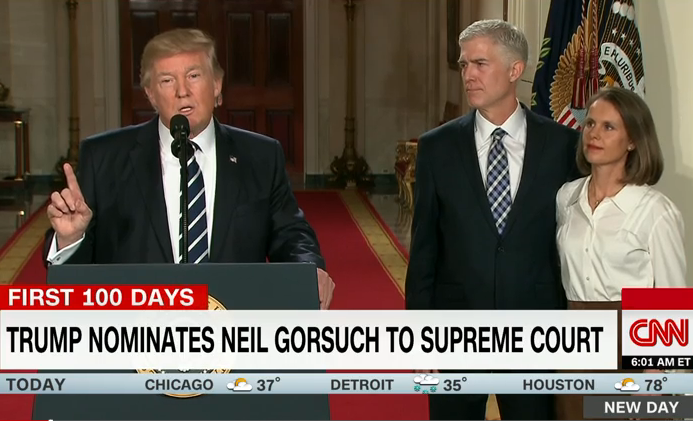 We’ve now spent nearly two weeks in Trump’s America, watching him nominate unqualified and otherwise terrifying cabinet appointments, one right after another. And as of this week, he’s also made his nomination for Supreme Court Justice, generally considered the most important appointment a President can make. (And one which was denied to Barack Obama during his last year in office by stonewalling Republicans.)

Trump’s pick is Neil Gorsuch, and while he’s not unqualified, he is terrifying. Here are a few things you should know about this potential SCOTUS.

Let’s start with his views on women’s reproductive rights. (Spoiler: he’s not a fan.)

He is probably most famous for playing a large role in the Hobby Lobby suit, which declared employers did not have to cover birth control in their employees’ health insurance plans. He called taking birth control “wrongful conduct.”

And that wasn’t the only time he ruled in favor of restricting women’s access to health care and birth control. In 2016, he ruled in favor of the state of Utah’s decision to defund Planned Parenthood–a ruling that was later overturned. The state’s governor pulled $275,000 in grants from the organization following the release of those videos (debunked as they may be) trying to paint doctors as trafficking in fetal tissue.

When it comes to abortion, he has also written that “no constitutional basis exists for preferring the mother’s liberty interests over the child’s life.”

So what else is scary about Gorsuch? A lot.

To start with, he reportedly founded the “Fascism Forever Club” at his ritzy prep school in the ’80s. Its goal was to fight the school’s “left-wing” staff members.

He’s scary in the wide general terms of being a disciple of the late Justice Scalia, a dedicated Originalist. What’s an Originalist? It basically means these guys believe the Constitution needs no updating, and that every word the Founding Fathers wrote is frozen in pristine, contextless carbonite. As Scalia himself put it (via NPR),

The Constitution that I interpret and apply is not living but dead, or as I prefer to call it, enduring. It means today not what current society, much less the court, thinks it ought to mean, but what it meant when it was adopted.

The Founding Fathers had no knowledge of women or ethnic minorities living as white men’s equals or having the right to own land or vote–let alone any concept of, say, legal birth control, concealed carry, or LGBTQ rights–but sure, let’s refuse to allow our society to evolve. For men like Scalia and Gorsuch, it’s enough to “endure.” How else are they supposed to hold on to not just the biggest piece of our national pie, but the entire thing?

Gorsuch has also repeatedly ruled to limit the rights of disabled students under the Individuals With Disabilities Act. Nancy Pelosi took a brief break from calling Steve Bannon a white supremacist Thursday to say this about Gorsuch:

If you breathe air, drink water, eat food, take medicine or in any other way interact with the courts, this is a very bad decision.

What saddens me the most as a mom and a grandmother, though, is his hostility toward children in school, children with autism. He has ruled that they don’t have the same rights under the [Individuals With Disabilities Education Act] that they could reach their intellectual and social advancement under the law — he has said that doesn’t apply to them.

There you have it. Our next potential Supreme Court Justice. This is yet another reminder to start getting real chatty with your Senators.