How the GOP Defends Their Health Care Bill: Outright Lies and “We’re All Going to Die” 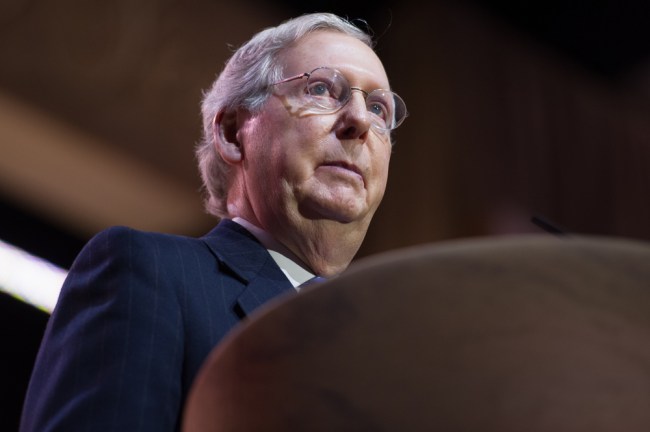 The Republican-controlled U.S. Senate has unveiled their “cartoonishly evil” health care bill, which the nonpartisan Congressional Budget Office (CBO), a number-crunching federal agency, estimated will leave 22 million more Americans uninsured while providing massive tax cuts to the rich. Only 17% of Americans approve of the bill, and it’s been lambasted for its cruelty to the disabled, the elderly, and anyone who pays insurance premiums.

So how do you defend something so wildly unpopular? By reminding everyone of their mortality!

Over at Fox News, Lisa Kennedy Montgomery responded to Democrats’ well-backed-up claims that this bill will literally kill thousands of people by observing that, hey, “we’re all going to die”!

“You know what the crazy thing is?” she said. “We’re all gonna die! And they can’t predict … There’s no way, unless they’re absolutely psychic, and have a party line to heaven, they don’t know who’s going to die, or when, or how many people. That is such a fool’s errand, trying to quantify something that serious and grave.”

What Montgomery calls a “fool’s errand” is actually a body of established science that links the lack of insurance to mortality rates. Just look at the 10-year difference in life expectancy between Canadians and Americans with cystic fibrosis.

But fear not, “to dust ye shall return” isn’t the only argument in favor of this bill. There’s also outright lies!

Note: Ryan does not support my right to choose to get my health care from Planned Parenthood.

Here Ryan is just pretending that the bill’s changes to Medicaid don’t exist. The bill would roll back the Affordable Care Act’s expansion of Medicaid by reducing the federal government’s share of the costs. Right now, the federal government pays its share no matter how many enrollees there are, and no matter how much their care costs. Under the new plan, federal spending would be capped, and states will choose between receiving funds as a per-capita cap or a block grant. Funding Medicaid this way will quickly become impossible – particularly for poorer (generally, redder) states. “If states wanted to keep the expansion,” explained the Washington Post, “they’d have to as much as quintuple their spending on those enrollees.” In short, as the Boomers get older, states will have to revoke the Medicaid expansion, or severely limit enrollee benefits, as a financial necessity. As an example, just look at what this bill would do to Maryland.

However, good ol’ Senator Cassidy (R-LA) argued on CBS News that kicking people off Medicaid will actually be great. “Now, I have concerns about the bill,” he said, “but let’s acknowledge that as folks would move off Medicaid, they would go on private insurance, coverage would continue, and in some cases that actually gives the patient more options for doctors that they can see than does Medicaid.”

This is simply not true, as the Senate bill provides smaller tax subsidies for individuals on the private market to purchase less comprehensive health insurance plans with higher deductibles. It’s a lose-lose-lose.

But what about taxes? Mitch McConnell tweeted that this bill lowers “middle-class taxes.”

However, the taxes that the bill eliminates applied to families with an income of $250,000 or more. For perspective, the real median household income in the U.S. in 2015 was $56,516. Anyone getting these tax cuts is not middle-class.

Over and over again, they’re trying to pretend that this bill doesn’t do what it quite explicitly does. To try and get this passed, our legislators are telling lie after lie. The only question now is whether they’ll get away with it.

(Via ThinkProgress, AOL, and CBS News; image via Shutterstock)