This is clearly the first step to Google building its own underwater city. 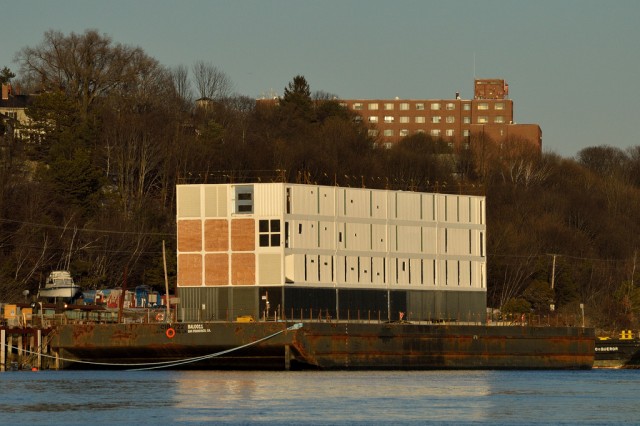 The future portable showroom that Google recently docked at a former navy base in the San Francisco Bay (or as it’s better known, the Google Mystery Barge) might have to be cast off, according to officials. Why? Because they don’t have the proper permits.

While the vessel belongs to Google, it’s not them who have irked state officials in this case. Instead, their issue is with the Treasure Island Development Authority, who is responsible for running the base which will eventually become the property of the city of San Francisco, and which also happens to be where the barge is currently docked. No one has authorized the TIDA or Google with permits to use the pier for the construction of the Barge, or for any other project, and after a number of written complaints, the San Francisco Bay Conservation and Development Commission has stopped in to ensure that they fill out the proper paperwork for this endeavor. If they don’t obtain the proper permit within a month, they could face up to $2,000 in fines — which is practically pocket money for Google, but it’s sort of the principle of the thing, you know?

There, of course, is an other easy fix to this problem: if they don’t get a permit, the barge has to go somewhere else. The latter would be faster, but they also run the risk of being targeted by another state commission somewhere else in the region for continuing to not have a permit.Really, they should just forgo all bureaucracy and take to the seas, where the artist would not fear the censor, where the scientist would not be bound by petty morality, where the great would not be constrained by the small! And then, I don’t know, they could collapse under the weight of their own political identities out there and drive each other insane, or whatever it is that happened to Rapture in Bioshock.

No word on whether the barge in Maine’s Casco Bay has been targeted by the foolish parasites of government or if they actually bothered to get a permit before starting work. But in the meantime, Google has also been hard at work obtaining the necessary approval from the US Coast Guard for these vessels. Andrew Ryan would be so ashamed of them.