… and I have literally (in the literal sense) no problem with it. Language nerdery, activate!

Google has rocked the foundations of language nerds and Internet users the world over by adding a second definition to the word “literally” in their dictionary. As you can see above, that definition is basically “figuratively,” i.e. the common colloquial usage of literally, i.e. the exact opposite of “literally.” For example: “I literally want to punch that guy in the face for taking up two seats on the subway.” I do not, literally, want to punch the person (…or do I?), but by saying “literally” I’m adding emphasis to what would otherwise be a rather humdrum statement about subway etiquette.

This might be a controversial viewpoint, but I’m all for the additional meaning of “literally.” Language is a constantly evolving creature; the rules aren’t set in stone, much as we might like to think they are. Awesome used to mean awe-inspiring, but at some point people started using it to mean the less-intense “cool,” and that’s OK, because the way we use words changes.

And anyway, all my rage on the subject of words meaning two opposite things has long since burned out because of the word “nonplussed”: 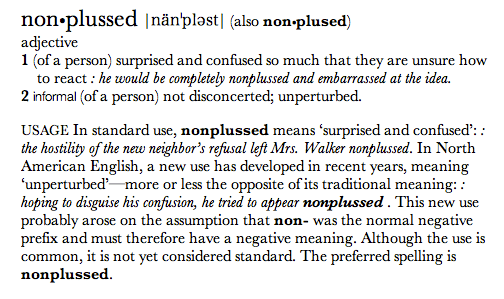 Basically, the English language is as crazy as a bag of cats. 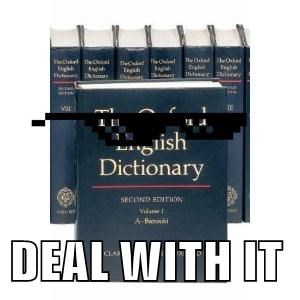