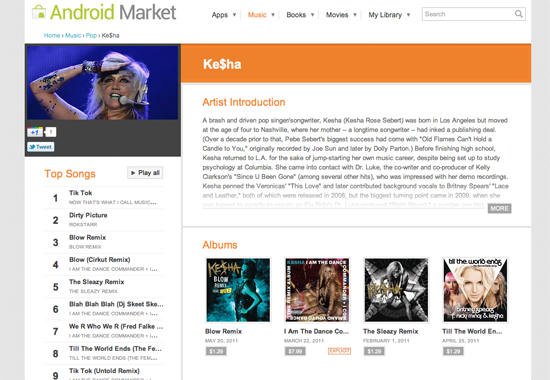 Google turned quite a few heads with the release of its streaming music locker service some months back, which allowed users to store up to 20,000 songs regardless of size on the search giant’s servers. From there, the music could be streamed to any device for free via a data connection. Last night, Google added another piece to their growing foray into the musical world with the announcement of a music download store as part of the Android Marketplace.

On the Android Marketplace, the music store is accessible both via computer and mobile device. The store is integrated directly to Google Music, so all tracks made there will immediately become available upon purchase. Tracks cost anywhere between $.69 to $1.29 a piece, with some free options as well. At launch, the scope of the store is surprisingly robust. From Google’s blog:

While the digital music store is pretty standard, Google is also bringing in some unique capabilities to sweeten the deal. First off is the Artist Hub, which allows musicians to build a storefront and distribute their own music — if they have the rights to said music, of course — on their own. For independent artists, this kind of direct access might be appealing.

Google has also integrated their music store with Google+, allowing users to share their music with their friends. Upon buying a song from the store, you can share a “free full play” of the song with your Google+ followers. At first blush, baking a music sharing system into the store seems to be taking a page from what Apple has attempted to build with Ping. However,  it’s worth noting that instead of building a standalone network for music, Google is simply bringing music to its established network.

Of course, Google’s music store is quite the upstart compared to the venerable iTunes store. True, launching with 13 million tracks is a very strong start — especially compared with the iTunes store launch in 2003, which had a paltry 200,000 songs. However, Apple’s store now boasts over 20 million tracks, and has supplanted all other competitors as the largest music retailer.

Perhaps more importantly is that while Google is playing it smart and integrating its products together for a more robust experience (see: track sharing on Google+), that might not be enough to give them an edge. The music streaming and purchasing space has become far more crowded than it was just last year, and each competitor has worked hard to carve a niche for itself: Apple has the advantage of ubiquity; Pandora and Spotify the advantage of maturity and low cost; Amazon the advantage of being linked to a familiar retailer.

What is refreshing to see is Google sticking with and maturing a product. Google Music has rapidly moved out of Beta and opened up to more users. Now, it is adding more features and has found a way to fit with other Google products. Even if it proves to be only a modest success, this new focused and comitted development from Google should be good for everyone. Now if only they could get some Wilco in their music store.