Google Music Beta: This Is What Music Lovers Have Been Waiting For | The Mary Sue

Google Music Beta: This Is What Music Lovers Have Been Waiting For 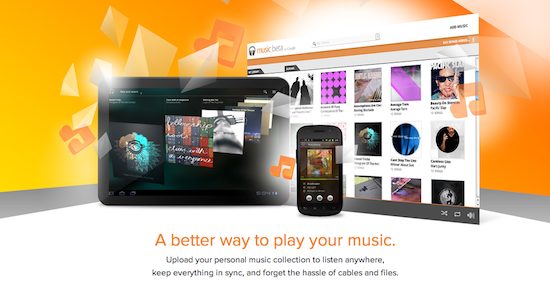 At today’s I/O Conference, Google announced the introduction of Music Beta, a new system for storing and syncing music collections on the cloud. It launches today as an invite-only service for US users: You can request an invite on the Music Beta page. The service allows the storage of a whopping 20,000 songs, blowing Amazon’s similar, 5 GB-capped service out of the water, and Google said today that it will be free for at least as long as it is in beta. One Twitter user jokes that based on Google’s lengthy beta track record — Gmail was in beta from 2004 to 2009, for heavens’ sake — that it will probably be free for five years. Even if it isn’t, Music Beta brings something new and exciting to the table.

We had to stand in line and request an invite from Google like ordinary slobs, and have not yet received it, so the headline of this post is speculative — or rather refers to the promise of the service instead of the thing as a thoroughly road-tested known quantity. If it turns out to be really buggy or otherwise suck, you’re allowed to laugh at us, but it looked promising enough at I/O for us to risk it.

Some critics have preemptively hated on Google’s first significant foray into music for not delivering as much as Google, by its own admission, wanted: Mashable laments that it lacks “sexier elements like sharing music, buying songs from Google (Amazon allows users to buy songs), and offline caching.” (Actually, this last point isn’t totally correct: Google Music does automatically cache recently listened-to songs for offline listening, and users can designate some songs for continued storage.) Google, for its part, blames its missing features the obstinacy of the labels: “Unfortunately, a couple of the major labels were less focused on the innovative vision that we put forward, and more interested in an unreasonable and unsustainable set of business terms,” a Google strategist told All Things D. Which is why Music Beta, like Amazon’s cloud music locker, launched without the approval of the labels. That alone wins them a few points.

But more importantly, a massive, free cloud locker is precisely what music lovers have needed for some time, and the missing frills don’t really matter that much. For one thing, it supports streaming sound quality of up to 320kbps; for another, that 20,000 songs really is 20,000 songs, apparently, not just based on some presumed size:number ratio. I’m not sure what would happen if one loaded it up with 20,000 FLACs of two-hour Deep Purple concerts, and that might not be advisable, but that’s a commitment nevertheless.  Amazon’s service has the right idea, but it’s not massive enough, and it’s so clunky as to prohibit ease of use.

While the inability to download music within Music Beta is a shortcoming of sorts, I would venture that the problem most people who love music face isn’t that they just can’t find enough good music to buy: It’s that music storage on a given hard drive is so cumbersome, and music mobility is so limited. (The reason the record labels hate this is because they generally don’t believe that a user who buys a song on computer X has bought the right to store it on the cloud and listen to it on computer Y.)

Before Music Beta, if you, like me, had a large digital music collection and a laptop with that wonderous but all too low-storage device called a solid state drive, you faced the dilemma of whether to allocate more than half of your disk space to music, whether to dump excess music onto an external hard drive and recognize that getting it back to play will be quite inconvenient, or whether to suck it up and pay for something like a premium Dropbox account or a high-capacity Amazon locker, which store music on the cloud and are a little more convenient, but aren’t totally so, and hey, they cost money. That all changes now. If Music Beta does what it says on the tin, I’m seriously considering jumping ship and canceling my trusty MOG account.

Why has Google made this too-good-to-be-true service free of charge? To screw over Apple, of course. Google Music Beta is Flash-only (sorry, iPad owners — especially 16 GB iPad owners), and optimized to run on Android devices, though of course it also works in-browser. It’s designed to seamlessly sync music and playlists across devices, and it supports bulk uploads “across multiple computers. You can upload music files from any folder or add your iTunes® library and all of your playlists. And when you add new music to your computer, it can be automatically added to your music collection online.” This will be a strong selling point for Android devices — a streaming 20,000-song library makes that small disk space seem a lot bigger — but like so many of Google’s ecosystem plays, this provides a tangible benefit to a great mass of users, Android or no.

There are a few long-tail risks here. First, Google could be a jerk and abruptly start charging big fees for the service without giving users a chance to migrate their music. Doubtful, but it could happen. Second, and more plausibly, this could enrage record labels so much that they try to sue it out of existence. If it’s any good, it will be popular with music pirates — how many people have legally paid for 20,000 songs? — but more as a tool for consumption rather than distribution. The labels still could have an argument though, and while Google isn’t allowing bulk downloads of uploaded music, presumably to prevent people from setting up dummy Google accounts and using Music Beta, RapidShare-like, to transfer songs in bulk, the benevolence of Google’s support for offline caching could get it in trouble down the road. And thirdly, if Apple, say, adds a snippet of DRM to iTunes purchases to expressly make them not work in Music Beta, things could get ugly.

Still, if Music Beta delivers on its promise, it has the potential to seriously disrupt the way we consume music, and to expand the definition of what it means to own a song. It’s about time.